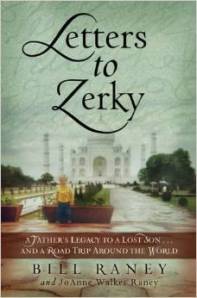 Letters to Zerky, is a beautifully told non-fiction book that tells of a father writing postcards to his son about all the adventures in Europe. The wife kept a book about everything that happened and when she passed away, Bill Raney took that book and retold the adventures they all had by using his story telling skills. His story telling skills are amazing. The pages are filled with visual pictures of the events as they are happening just by his words. They pop to life. This story talks about the different cultures and how sometimes are greatest worries are our lesser problems. The book changes one’s perspective on the different cultures such as the Iranians. There was a moment when they let an Iranian man take their son upon his lap for a horse ride. They stood their breathless, watching as the man ran away with their son! Their worries and sadness grew for their son, but soon realized that they worried for no such reason. The Iranian man came back with the son, Zerky. How happy they all were then! There are many other culture differences within their adventures that hold exciting and intoxicating adventures ready for readers to begin their timeless journey following Zerky, his parents and their dog all over Europe! I highly enjoyed following all over as they traveled and experienced different cultures and people. I thought this was the most exciting novel that I have read so far! I would definitely recommend this stunning novel to readers allover the world! I rate this book a 5 out of 5 stars!