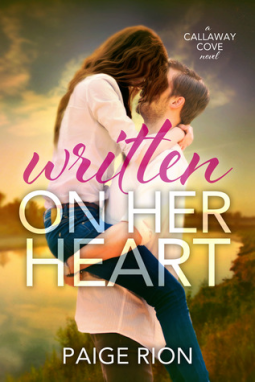 Written on her Heart is indeed a fabulous read. The characters are stunning. Their emotions and different lives set them both apart and together. Their lives growing up couldn’t have been more opposite. But their adult life goals are the one and same.  Andi is a female college student living in a small town with her parents. Her dream ever since she was a little girl, was to become an author. Then there is Ford Delaney. A best selling author who comes to her small town to hide away from all the media that has exploded around him. He loves to write but not to be exposed of by everyone. He ends up meeting Andi through an interview process to become his assistant. But, Andi herself is up for more surprises. Upon entering the waiting room, she meets both of her two best friends. One wants to seduce Ford into marrying her because her life is falling apart. The other friend wants to marry Ford so that she can be taken away from her evil stepfather. Ever since she was nine years old he has been abusing her. But with him being a town hero, no one would believe her abuse story. Andi is beyond frustrated that her friends are trying to take away her only chance of becoming an author. She thinks her friends reasons for taking the job away from her are not good enough. And it isn’t until the very end when Andi realizes that her two best friends had major issues that caused them to want to take the job away from Andi.  Then there is the issue of Andi’s boyfriend. Will her job as Ford’s assistant break them apart? And what about her and Ford’s undeniable attraction towards one another? Who will Andi choose? And will Andi be able to keep her friends or will she only lose them all in the end?

This is a very raw emotional romance that takes one’s breath away. So many twist and turns that pop up leaving the reader wondering what Andi will do next. I loved reading this entire novel by Paige Rion. She has a well written plot that will capture her audiences all over the world. Her characters are enticing and addictive to read about. I love the up and downs that Andi experienced throughout the story. The story was realistic, believable, and heart melting. I enjoyed the way Paige Rion captured all the characters pain, sorrow, joy, and all of their quirks. It was refreshing and delightfully entertaining to read. I would definitely recommend this novel to every reader. Written on her Heart is a must read story that everyone will fall in love with over and over again. Overall, I rate this novel a 5 out of 5 stars.