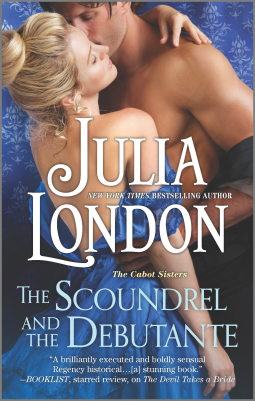 A hot and sizzling read unlike any other.  The Scoundrel and the Debutante by Julia London is by far the hottest novel readers will read. A story of an English woman being tainted and ruined for the ton, is soon tempted by a sexy American man who tempts her in more ways than she can deny. Roan Matheson has hired Prudence as his guide to help him find his sister for his family’s sake. While these two go about their search both Prudence and Roan will find an irresistible passion that ignites between them that neither can turn away from. Can Roan find his sister for his family’s sake and will he make Prudence his wife? Or will Prudence’s scandal situation only make his job of finding his sister harder yet than he imagined? And will Prudence want this sexy American man as hers forever? Can he be the one for her? Or will being with Roan only make her already unbearable scandal situation much worse than before?

I highly recommend reading this beautifully woven story of two strangers uniting despite their position in life. I loved reading this historical masterpiece written by Julia London. Her novels are out of this world and blow readers away with the most compelling romantic stories ever told. Every reader will fall deep in love with both of the main characters as the plot unfolds. Both Roan and Prudence have a way of alluring readers deep into their world. Overall, I rate this novel a five out of five stars.