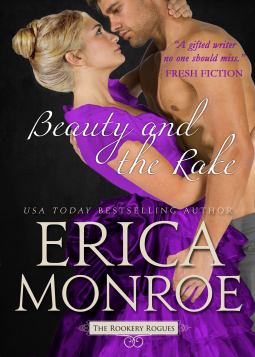 Beauty and the Rake by Erica Monroe is one romantic suspense novel that will lure readers deep into a riveting plot. Erica Monroe surely knows how to pull readers into her magnificent story of one girl’s misfortune leads her on a journey to help her father out and keep her sister taken care of. But then fate has a way of bringing Abigail Vautille back to her haunted past that had left her scarred and penniless. Little does she know that the one man whom she makes a deal with to pay off her father’s debt is the same man who paid for her hospital care. Inspector Michael Strickland of the Metropolitan Police is that man. He can’t help the sight of Abigail. She does something to him that he can’t explain. Her beauty takes away his breathe and wants nothing more than to bed her. But he won’t bed her if she’s not wanting to bed him. She may think he’s a monster, but he won’t force himself on a woman no matter if he paid off her father’s debt in exchange for her body. Abigail, is a virgin and isn’t ready to commit herself to the pain she heard about when doing such an act. She did make a deal with the man and sooner or later she will have to give herself to him. Soon, danger from the past arises once more. The man who hurt Abigail in the past is now loose and wants to take out revenge on her and the inspector. The inspector will stop at nothing to keep Abigail, the one woman he loves, safe. Can Abigail and the inspector find happiness within  each others arms? Or fate be cruel?

A highly intriguing and fantastic historical romance that will keep readers up all night long. Beauty and the Rake has similarities to Beauty and the Beast but in a much more realistic and engaging way that entices readers to the plot. A real page turner. Erica Monroe has beautifully woven a masterpiece that will never be forgotten. Readers will love this romance. Overall, I rate it a five out of five stars.