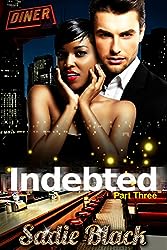 Indebted Part 3 by Sadie Black is the last and final installment in this exciting interracial romance series. In the first part we have learned about how both Matthew and Kendra met and their different backgrounds. Both all heads over heels in love with each other. Then in part two we have explored their struggle as a couple. Secrets that were hidden and were finally released. Now, in part 3 we as readers will find out if they have overcome everything or if they have failed individually to grow past the secrets that ere tearing apart at them. Kendra has finally achieved her dreams of graduating and leaving behind her job at the dinner for a better one. But then she feels all alone in the big world despite her success and determination. After going through all of the secrets she finally sees the real Matthew and has decided to stop running away. But will Matthew still want her or will she finally have exhausted his love for her?
Sadie Black has a raw talent in placing her readers deep into her world where romance is anything but easy. Portraying the reality and real difficulties that everyone in real life goes through when in love, readers won’t want to stop reading. The tension has finally built up and leaving readers holding their breath as they finally find out the make it or break it moment that they have been waiting for. Characters are strong and so life like that readers will have difficulty telling fiction from nonfiction. A great masterpiece for the ending of a new brilliant series that crosses so many social ladders and barriers. A gripping suspenseful romance unlike nay other that will leave readers gripping their seats wondering what happens next. Overall, I rate this novel a five out of five stars and highly recommend this to readers all over.