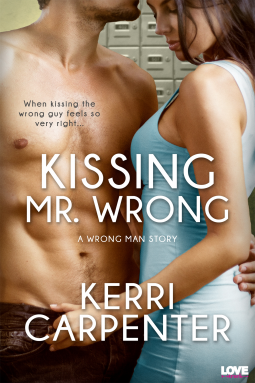 Kissing Mr. Wrong by Kerri Carpenter is a steamy hot romance that tells us how one woman who decides to go with it and kiss the one man that she automatically deems as the Mr. Wrong, starts to feel like anything but wrong. Graphic designer Vanessa Hewitt was about to fall off a bridge but luckily Mr. Wrong, John Campbell, was there to save her. The adrenaline they both were feeling in just the one moment caused both of them to get caught up in each other in more ways than they ever expected. Vanessa thought she would never meet her Mr. Wrong guy ever again. However, fate plays tricks on everyone. Soon John finds out that Vanessa is at his sister’s wedding to take photos and he plans to do whatever he can to keep her at his side forever. But he never planned on  getting stuck in a closet with her.

Vanessa and John are both strong characters with a bad-ass presence that will lure readers deep into their romantic and sexy story. What woman could resist a former soldier from Afghanistan? And what smart man would let go of a woman who is constantly in his thoughts and turns him on in every way? Kissing Mr. Wrong is an inspirational story for all women. Sometimes it takes guts to kiss Mr. Wrong because just maybe he is actually our Mr. Right all along. But we wouldn’t know until we took that very first step and leap with all we have. I loved reading this novel and I look forward to reading more by Kerri Carpenter. Her plot was well written and her characters were realistic. Readers won’t find a better romance than this. Overall, I give it a five out of five stars.