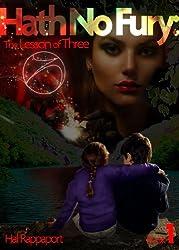 Hath No Fury is unlike any other novel within its genre. A captivating paranormal romance that intrigues readers all the way to the end. Powerful, realistic, and exciting, Hal Rappaport has created a masterpiece that will always be remembered. His characters are unique they live in a world with those who practice magic and don’t discover their own powers until much later. But soon their world is tilted upside down and danger comes crashing ruining what was once a peaceful place fill with an evil that had been waiting.

Hath No Fury is set in the 1970’s that will grab readers’ attention and lure them deep into a paranormal world where magic does exist. Times are hard especially when there’s an evil source abiding its time until it’s ready to unleash it’s full force on the world. A story filled with mystery, suspense, and friendships. Mark and Amy go about on their own self-journey of discovery and what could lead their friendship to something more powerful than they thought. Just as Mark and Amy finally have things settled, and evil so unimaginable begins to tip their world upside down causing chaos and panic everywhere. Their world as they knew it will be changing faster than they would think.  Can Mark and Amy make it through everything intact especially their new relationship or will they lose each other? A highly fascinating piece that is brilliantly well written and will drag readers back to it plot every time. I loved reading Hal Rappaport’s masterpiece, because it’s different from any other novel within it’s genre. A must read. I would highly recommend this novel to all readers. I promise it will become your new favorite. Overall, I rate it a five out of five stars.