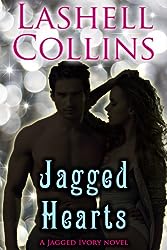 Jagged Hearts is the first perfect installment to a great new romance series. Readers will be wowed from the first page like I was. I choose this novel, because the story’s synopsis aught my eye and from there I wanted to know more about what happened. Trust me, once you pick up this story you won’t be putting it down anytime soon. This is just the beginning in a stunning series of more hot reads to come. Lashell Collins is one very talented writer! Her words will leave readers in a huge emotional addictive state that never ends.

Jagged Hearts is indeed everything the name suggests. Two souls who happen to find one another by chance and after four years neither has stopped thinking about the other one. Noah is everything women and girls could want in the man of their dreams. A talented and bright individual who is rough on the outside but sweet where it matters most. Noah just got out of a relationship with a girl who didn’t believe in him or his dreams. Noah couldn’t stand that she didn’t trust me him at all. So, he left her and little did he know fate was going to dangle the right woman in front of his nose.  Mercy Holland and her friends hung out where Noah and his band played. She loved their music and was a loyal fan. When he hits on her, Mercy takes what he gives. But then things change and he leaves her behind. His band excels and make it to the tops. Every song is dedicated to a woman Noah left behind. However, fate isn’t finished with Noah nor Mercy just yet. Noah and his band end up with a manager. A manager whose daughter so happens to be the one girl he left behind. Now, as she is hanging around the band, Noah has to struggle with his hidden emotions and with his older brother hitting on her. Plus, there’s her dad who is his band’s manager. Can things get better or worse?

I loved reading Jagged Hearts by Lashell Collins. Her characters are just too irresistible and too hot to ignore. The scenes are livid and packed with enough action and suspense to keep readers in all night long. A perfect novel full of heated tension, a love that can or can’t happen, and what a band group goes through daily. I highly recommend this romance read to readers everywhere! Jagged Hearts is a must read for all. Overall, I rate it a five out of five stars.