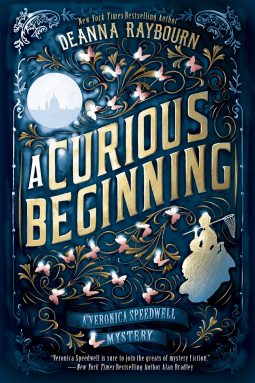 A Curious Beginning by Deanna Raybourn is exactly that. Readers will be lured into a curious beginning of events that will keep them even more puzzled as the characters go about finding the truth. A romantic mystery thriller that readers everywhere will come to love. The plot is fast-paced, complex, and suspenseful. I could hardly put the novel down. The cover of this stunning read intrigued my interest. It made me wonder what the woman was up to and where she was headed. Little did I know…that the mystery was greater than I had imagined.

Deanna Raybourn’s debut novel, A Curious Beginning, is one that should be read by every reader. This brilliant novel has it all. Action, intrigue, and love. Two characters are brought together by one man, who promises to give them the truth about something one of them didn’t know. Then he’s murdered and the two are left running for their lives while trying to figure out what the man was going to tell them before he was killed.  Can they find the uncover the truth before it’s too late?

A Curious Beginning is a one novel I highly recommend to readers. You won’t be disappointed once you open up to the first page. Excitement and adventure are awaiting every reader. Read on and discover the journey of two curious individuals. Overall, I rate Deanna Raybourn’s novel a five out of five stars.