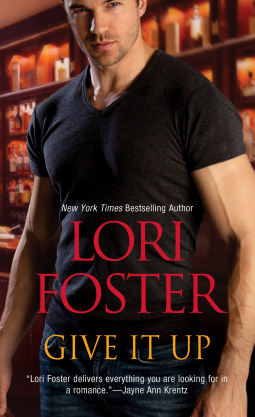 Lori Foster has done it again. Inside her latest novel are three very hot reads. Readers will be left breathless and begging for more by this talented bestselling writer. Her words come to life bringing readers into her characters’ shoes. It’s almost like you’re living the characters’ lifestyles. Vivid, hot, and intriguing Give It Up will lure readers in fast and easy.

Give It Up by Lori Foster is a fabulous must-have for romance readers. Her collection starts off with Some Like It Hot. Inside this story we find that one doctor has it in for his best friend’s secretary. Her outfit isn’t sexy nor does it make her look sexy, yet to Dr. Cary, everything about her entices him. She lures him in deep. Nora turns him down constantly until her girlfriend convinces she try letting loose. That, and that Dr. Cary hasn’t, and won’t give up on getting her to say yes to him.  There’s nothing like a hot man who goes after what he wants and fights for it.

Then there’s Playing Doctor. Dr. Axel, Cary’s best friend, is a player when it comes to women. One night stands are all he wants until he meets a beautiful woman, who turns him on at a party. Turns out that she’s a virgin and much younger than his 31 years of age. But, hot damn, she’s gotten under his skin in ways no woman ever has. Axel turns the lustful and gorgeous woman away after he finds out that she’s a virgin and younger than him. He has his limits. The world must really hate or love him because his next ob-gyn patient turns out to be that same hot, incredible woman. She’s there, all naked for him, and frustrated as ever seeing that it is him. She wants the pill. But, not after seeing him. Next thing Axel knows she leaves his office. But, can he come to his senses and find her before it’s too late?

Last but not least, He Sees You When You’re Sleeping, is just as hot, if not hotter. Lori Foster surely knows how to write convincing scenes and believable characters. Axel Dean’s brother, Brooker, has a thing for the beautiful woman next door to him. She has a thing for Brooker but knows that he’s with another woman and she doesn’t want a man who’s attached to another. But, what she doesn’t know is that Brooker’s girl started it up with his brother and that gives him the chance to call it off with her and be with the one woman he wants. But, first, he has to convince Frances that he’s free, unattached and wants only her as his woman. Will Frances be convinced and take the chance with the sexy hot Brooker next door, or not?

Overall, I loved reading these stories by Lori Foster. She is definitely one of my favorite romance writers and her compelling, yet beautifully well-written, novels give readers a lot to look forward to. I would highly recommend reading these new stories to readers worldwide. After the first page, you will be looking for more… and you will fall in love with this collection as I did. A spell binding romantic getaway for readers. Fresh, tempting and raw romance at its greatest moments. I rate Give It Up a five out of five stars.