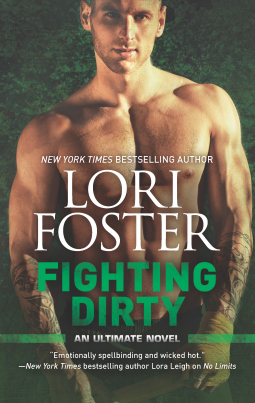 Good girl meets bad boy. It’s a story that rarely ends well. But Merissa is taking matters into her own hands. No matter how he views himself, the Armie she knows is brave, honorable and completely loyal. And as past demons and present-day danger collide, they’re both about to learn what’s truly worth fighting for…

Fighting Dirty by Lori Foster is one hot sizziling romance that readers won’t be able to stop reading. Her novel shows readers the hard life of one very young man. His mother left and then he has to deal with a no good excuse of a father. But that’s not all. Soon, a young rich girl will make his life uneasy. Then her father also, goes after him. Armie was lucky. The only good thing he had in life was his best friend. A friend that knew the truth and went out of his way to help protect Armie. However, his past comes back to nip him in the rear. He struggles with how it will affect his friends and the woman he loves. A woman that loves him despite knowing his past and the women he’s been with. But Armie keeps trying to push her away. But she’s determined to make him fall and accept her. Will Armie make it through his past and accept his love for the woman in his life or will everything be ruined?

Lori Foster has done it again in her latest novel. This story is packed full of real life drama. A male hero who doesn’t have the best life growing up, and has people after him. Then there’s his undeniable attraction to a certain woman and he’s feeling the stress. Readers will fall in love not only with the MMA fighter, Armie but also, in love wiht his woman, Merissa. Merissa is the good girl who is tough as nails when it comes to fighting for her love. However, someone is after her making things hard. Two lovers fighting their way through life and struggling with where they will be when their fights are won. Intriguing, hot, and absolutely entertaining. I could not stop reading. Fighting Dirty is well-written and the characters are well-developed. The plot is fast-paced and will instantly lure readers. Overall, I highly recommend this read to readers everywhere.