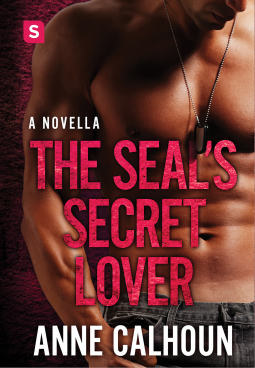 The first in the Alpha Ops novella series that features an alpha Navy SEAL who meets his match in a buttoned-up firecracker who is hiding a passionate side.

Logistics director Rose Powell agreed to chaperone her grandmother on a guided tour of Roman ruins on one condition: her brother Jack would come with her. But when Jack backs out, his best friend and fellow SEAL Keenan Parker takes his place. Without a working cell phone, Rose’s orderly world drifts into dreamy days and hot, secret nights in Keenan’s bed. Keenan left the Navy but never made it any farther than Istanbul, much less to a viable future. Until he does, he’ll show Rose things she didn’t know about herself. Can he give his heart and his future to the woman he promised his best friend he’d never touch?

The Seal’s Secret Lover by Anne Calhoun is a novel that will heat up a reader’s night like a match to gasoline.  Never have readers felt a novel that shows them how to both open their hearts and bodies to the unknown. That’s exactly what happens here in Anne Calhoun’s sizziling read. Readers beware of the heat because this book only gets hotter with every page.

A woman who hesitates to complete a task…but only will do it if a specific person comes with her. Just as the agreement is sealed…it crashes hard and fast. Rose Powell is now in a hot seat. She is filled with taking on the task hands-on and that won’t be the only thing that her hands will be busy with.  Keenan Parker magically takes the place of the a man whom he made a promise to and now, with a woman like Rose near him, that promise will be difficult to keep. The instant these two characters meet, the faster the novel spins forward. A man like Keenan is what every woman needs. Someone who makes her laugh, and feel wanted…The Seal’s Secret Lover, leaves readers with intrigue as they read on to find out what happens.

This was the first novel I have read, by Anne Calhoun, and it was everything I could dream of. Fun, sexy, exciting is exactly what The Seal’s Secret Lover is. Readers won’t be disappointed with this military romance. Readers will still be thinking about Rose and Keenan until Anne Calhoun’s next brilliant masterpiece. Overall, I highly recommend this well-written story to readers everywhere.