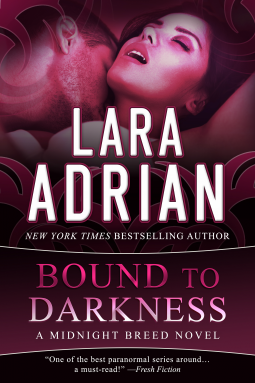 Carys Chase is accustomed to making her own rules and letting her heart lead the way–no matter what anyone else has to say about it. A rare Breed female and a daywalker as well, headstrong, beautiful Carys is one of the most powerful of her kind. She lives passionately and loves without limits, especially when it comes to the lethal cage-fighting Breed warrior called Rune.

Unbeatable in the ring, Rune exists in a brutal world of blood and bone and death. He’s made his share of enemies both in and out of the arena, and his secrets run as deep and turbulent as his past. A dangerous loner who has survived by his fists and fangs, Rune has never allowed anyone to get too close to him…until Carys. But when the bodies buried in his past rise up to threaten his present, Rune must choose between betraying Carys’s trust or putting her in the crosshairs of a battle neither of them can hope to win on their own.

Bound to Darkness by Lara Adrian is one of the most compelling hot vampires novels in existence. Her stories come to life and send readers deep into danger with heart pounding situations, and enough heat that will melt Alaska. Lara Adrian never disappoints readers. Her characters are tough, sexy, and vibrant. There’s never a dull or slow pace in any of Lara Adrian’s novels. Bound to Darkness will not just lure readers in but capture their heart and souls.

A woman who’s family wants to keep her safe and doing what they want that they don’t see the woman she is or has become. When faced with a choice, Carys will decide to leave her family and home for a man who turns her into mush.  There’s nothing like two vampires with their own life issues and an undeniable love that never ceases. Carys has come to terms in love with the tough vampire fighter, Rune. He’s strong, sexy, and he’s hers. Rune is so tempted to bind himself with Carys but his past and the danger that comes with him are preventing a happy future for him and Carys. Can he protect her and will they ever find their happiness? Bound to Darkness is exactly what’s happened to Rune. He’s bound himself to a life of darkness to keep his woman alive and safe…until it comes crashing and destroying all he cares about. I highly recommend this paranormal romance to readers everywhere.