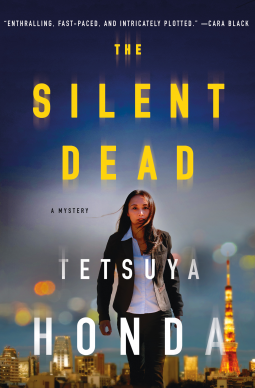 When a body wrapped in a blue plastic tarp and tied up with twine is discovered near the bushes near a quiet suburban Tokyo neighborhood, Lt. Reiko Himekawa and her squad take the case. The victim was slaughtered brutally—his wounds are bizarre, and no one can figure out the “what” or the “why” of this crime.

At age twenty-nine, Reiko Himekawa of the Tokyo Metropolitan Police’s Homicide Division is young to have been made lieutenant, particularly because she lacks any kind of political or family connections. Despite barriers created by age, gender, and lack of connections, she is mentally tough, oblivious to danger, and has an impressive ability to solve crimes.

Reiko makes a discovery that leads the police to uncover eleven other bodies, all wrapped in the same sort of plastic. Few of the bodies are identifiable, but the ones that are, have no connection to each other. The only possible clue is a long shot lead to a website, spoken only in whispers on the Internet, something on the dark web known as “Strawberry Night.”

But while she is hunting the killer, the killer is hunting her… and she may very well have been marked as the next victim.

The Silent Dead by Tetsuya Honda is a thriller that will leave readers feeling cold with fear. An inside gateway to what the killer thinks and feels sends shivers down my spine. The dead are piling up, and the killer isn’t satisfied unless there’s constant bloodshed. Every bloodshed means the killer feels the world is not grey…and when it feels grey there’s bound to be another killing. The suspense is overwhelming.  Readers will find themselves buried deep in the case along with the female lieutenant. But the killer isn’t far from her heels…

Tetsuya Honda’s writing is clever, frightening, and suspenseful. Every page brings readers closer to the danger at hand. A killer that kills because the world is much better then when there’s no killing…no fighting.  The feel from the first kill sparked something into the insane, unstable killer whom a female lieutenant, Reiko, is out to catch. A strong independent woman who has a way of solving cases. Little does she know this one will take everything she has to solve or it might be too late. I also enjoyed the companionship that Reiko shares with an older doctor. Their friendship is refreshing and the family life, of Reiko’s, is an interesting one that many readers can easily relate to…Overall, I highly recommend The Silent Dead to readers everywhere.