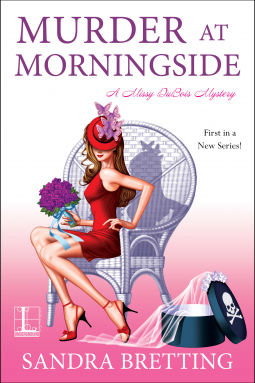 Hired to craft a veil for a socialite getting married at Morningside Plantation means Missy can bask in the height of the antebellum atmosphere. But when the bride is found dead in a women’s bathroom, Missy the milliner finds herself entangled in one unfashionable murder. With the list of suspects thicker than the sweltering Louisiana heat, including a gaggle of bridesmaids shedding nary a tear and a family with no shortage of enemies, it seems anyone at the mansion may have done away with the bride-to-be. While Missy has  a Southern charm to spare, she’s going to need more than manners and a manicure to put a hat pin on this murderous affair . . .

Murder at Morningside by Sandra Bretting is an intriguing Southern slash historical murder mystery. The main character, Missy DuBois and her fashion guy friend are the perfect friends. Then there’s the front desk lady who seems to more than friends with the bride’s groom. Missy DuBois knows they know another and saw they arguing…about what she doesn’t know. But then it’s not soon when the mother of the bride finds out her daughter is late to a hat competition. The desk lady offers to look for the bride but only brings news that the bride wasn’t in her room last night and no one knows where she has gone. The only people concerned about the disturbing news seems to be the mother and Missy. Missy feels all of the drama around her…something is up…and when they bride is found dead…the suspects are in no short supply. Who had more motive or more reason to kill the bride and can Missy figure it out?

Murder at Morningside is fantastic. I loved reading this and I am happy to know that it’s the first one in the new exciting series. Sandra Bretting has captured my full attention from the front cover to the last page. The front cover is an accurate portrait of what lies ahead on the pages waiting for readers everywhere to read. Adventure, suspense, intrigue and a whole lot of drama are sure to follow readers as the race onward to finish this title in one sitting. Murder, love triangle and suspects everywhere will make this one must read for fans of Miss Fisher, Agatha Christie, Murdoch Mysteries, and Nancy Drew. Humor, excitement, and a large cast of amazing characters will keep readers hooked. Overall, I highly recommend this novel to readers worldwide.