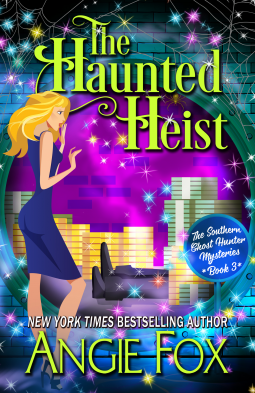 Just because she can see the dead doesn’t mean Verity Long wants to spend her days hunting ghosts. Instead, she’s over the moon to land a marketing job at the local bank…until she finds her boss dead in the vault. Even her ghost friend, Frankie, knows that’s no way to start a career.

Glad to let the police take charge, Verity steps aside, bound and determined to keep her ghost sightings to herself. But when she learns the main suspect in the murder is a very crooked, very dead mobster, Verity knows it’s up to her to solve the case.

She teams up with her ghostly gangster buddy Frankie, as well as the irresistible and charming Ellis, as the three of them, search haunted mob hideouts, hidden passageways, and historic cemeteries for the facts behind the crime of the century–and a modern-day motive for murder.

Too bad uncovering the truth could make Verity the next victim.

Third, book in the new Southern Ghost Hunter mysteries. Can be read as a stand-alone.

The Haunted Heist by Angie Fox is one that readers will find hard to put down…her words make readers eager to read further to find out what happens next. This is the third brilliantly well-written mysteries with a bit of romance in the air and a paranormal mixture that will forever more entice readers to her novels. The eerie presence of ghosts, a murder, and one woman set out to make the main character’s life a misery of hell…is one stunning way to pull readers in from everywhere. Angie Fox is indeed a talented writer. I love her characters and can’t wait to read the next exciting novel.

Inside the Haunted Heist, Angie Fox, introduces readers to many new characters. Like those of a dangerous mob and who are presently dead and still hanging around as ghosts. Each one of these ghosts makes the story full with more humor, terror, and excitement. Spicy, raw, and intriguing. Frankie is a ghost mobster who is stuck living with Verity. A woman who can speak and see the dead and who accidently bound his spirit to her house. Both have to put up with each other. Then there’s the moment when Verity goes to the bank to land a much needed job only to find her new boss has been murdered. Talk about interesting…and last but not least, there’s Ellis. A police officer who knows about Verity’s way with ghosts and still has the hots for her…but it’s the issue of his mom that keeps Verity from pursuing Ellis as much as they would be like…Angie Fox has created a laugh-out-loud msyterious yet highly entertaining novel, that readers will fall in love with just from reading the first page. I definitely recommend this read to readers worldwide.