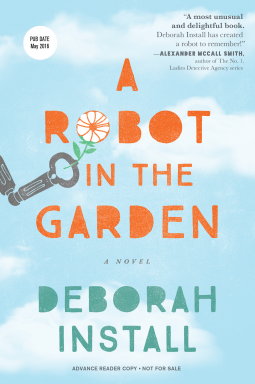 For fans of THE ROSIE PROJECT and THE CURIOUS INCIDENT OF THE DOG IN THE NIGHTTIME, A broken man and his damaged robot build an unlikely friendship-with some assembly required.

Ben’s really great at failing at things-his job, taking the garbage out, and being a husband. But when he discovers a battered robot named Tang in his garden, he decides to get out of his couch-ridden comfort zone. Without a crucial bit of machinery, Tang will stop working, and Ben can’t let that happen, especially since he’s already alienated everyone else he cares about. Determined to achieve something for once in his life, Ben sets out to fix his new robot comrade and soon discovers that Tang might be just the thing to fix what’s broken in Ben. Funny, touching, and charming, A Robot in the Garden explores what it is to be a man, a sentient being, and a friend.

A Robot in the Garden by Deborah Install is crazy, silly, funny, and sweet. I have never read a book quite like this one. One day a young couple wake up to find a robot in their garden. From there I got to enjoy the husband questioning the robot to feeling something for the sad looking robot that would hardly speak to him. The man fights with his wife over keeping the robot. She complains that it’s old, broken and can do nothing but sit and look at horses. Yet, as the story progresses I found out along with the man that the robot was more than just an old AI.

The robot had feelings just like any other human being. Soon, the sad yet dangerous journey into finding out the robot’s past life and getting it fixed new will tug at readers’ hearts just like it did for mine. Tang, the robot, is adorable. Like a little boy, the robot makes one laugh and cry and feel good. Tang also helps Ben find himself and help him finally heal after losing both his parents. His wife didn’t understand that until much later on…I guess it’s better to realize things than not to realize them at all. Love can heal and last forever…but it takes time and takes both people willing to love to work. A Robot in the Garden showed all this and more. Marriage isn’t easy nor will ever be but it’s definitely worth having if both want it. Deborah Install leaves many surprises and twists along the way that makes this an irresistible read. This was the first novel I have read by Deborah Install, and I highly recommend it to readers worldwide.