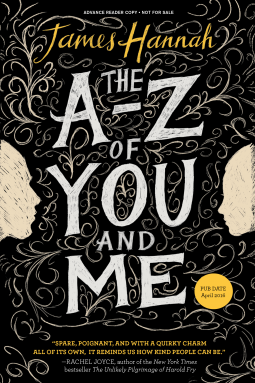 A striking literary debut of love and mortality, The A to Z of You and Me is the story of a man who doesn’t have much time, his love for a girl who isn’t there, and the game he plays while waiting that illuminates the devastating and beautiful turns of life. The A-Z game. For Ivo, it’s a way to pass the time, a way to avoid the pain and a way to think about what really got him here. His hospice nurse suggested it – think of a body part for each letter, and think of memories connected to each one. And so begins the revealing of his misspent life: the terrible teenage choices, friendships made and cracked, the love he’ll never get back. He remembers the girl who tried to help him, the friend who wouldn’t let her, and the sickness that chases him even now.

The A to Z of You and Me by James Hannah is a journey that sucks me in whole and keeps me turning the pages. Ivo is just a regular everyday kind of man. He fell into the wrong crowd, did stuff that he wasn’t proud of, and lost a chance at love. Now, as an elderly man, in a hospice, he knows his life is short. A nurse has him go through an exercise using every letter of the alphabet to come up with a story or a life memory attached to each letter. As Ivo goes through the alphabet, I got to travel through snippets of his younger self. Ivo lost his father to cancer, he experienced both bad and good days during his younger life. I enjoyed following the person he was back then and the man he has become. He knows what he did wrong and wants to make things better. He’s a little afraid, but soon…he finds some peace and love in the end. I truly enjoyed this talented writer’s style and the well-written plot. The characters were well-developed and were able to drag me into the scenes as though I were experiencing it all for real. The A to Z of You and Me by James Hannah is definitely a literary novel that I would recommend to all.