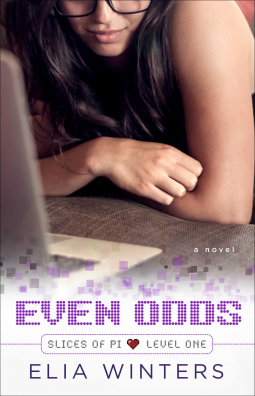 Geeky meets kinky in this first deliciously sexy novel in the Slices of Pi series by RITA-nominated author Elia Winters, which follows the romantic rendezvous of the employees at PI Games, a gaming company based out of sultry Florida.

As a design manager at PI Games, Isabel Suarez is no stranger to the struggles of being a woman in a male-dominated industry. But when her team attends a gaming convention on the other side of the country, she figures there’s no harm in putting aside her professional demeanor for one weekend to participate in a risqué scavenger hunt. Why shouldn’t she let loose and have a little fun?

A careless romp soon turns into more, however, when Isabel ends up having a fling with Caleb Portland, an artist, and animator, without knowing he has just been hired to partner with her at her company—and Caleb can’t bring himself to tell her. When they end up coworkers a few weeks later, they need to find a way to work together and keep things strictly professional. Caleb doesn’t want to take on a relationship and risk failure. Isabel doesn’t want to risk ruining the professional reputation she’s worked so hard to develop. But when faced with the undeniable sizzling chemistry between them, will either of them be able to resist temptation?

Even Odds by Elia Winters is absolutely a must read for all. This is one geeky romance that will keep readers laughing and falling in love with the characters. The female character, Isabel, is the only female working in an all male dominated area. Game software. She designs games and is now in the manager position. Before moving to the PI Games she worked at another company. A company where she experienced a disastrous relationship which then lead to sexual harassment. The sad part was that the Human Resource person told her that words weren’t much of a harassment and that they wouldn’t take her complaints seriously. Isabel ended up taking action that suited the company better than helping solve her issues at work. This past life experience has left her feeling like an ice queen at work. Acting as sexless as possible to survive working in the gaming industry surrounded by all men. An area that showed me that was hard for any woman including Isabel to be taken seriously by men as a professional. Her hard work pays off…but there’s one employee who makes her uncomfortable…will she face up to him or let him continue his harassments against her? The other part to this exciting tale was the trip to DiceCon and that’s where everything heats up…Isabel wants to let loose for once and three of her teammates get her in on a game that has her meeting the one man that might just be a forever thing…a man that can not only make her feel like a woman but also respect her in the industry. That combination alone would make any woman’s knees go weak. Isabel and Caleb are a perfect couple. Their journey was realistic and believable. The pages got hotter with every turn….and the plot sets readers on the edge of their seats wondering what comes next.  Even Odds by Elia Winters is by overall, a hot and brilliantly well-written geeky romance that all will enjoy. I highly recommend this novel to readers everywhere.