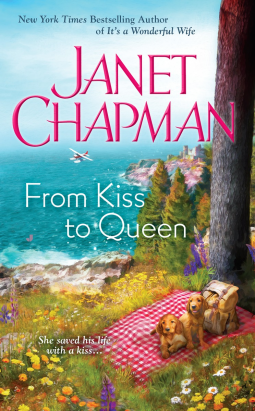 Synopsis:
Jane Abbott knows that she’s nobody special, so instead of looking for romance she’s hunting partridge in the Maine woods when a plane crashes into a nearby pond. Diving in to save the pilot, Jane instinctively gives him air by way of a lifesaving kiss, and leads him to safety through a barrage of gunfire.

The handsome stranger returns the favor by kidnapping her.

Clearly no ordinary man, and insisting Jane’s life is in danger, Mark spirits his stubborn guardian angel to an aircraft carrier in the Atlantic Ocean. Only then does she discover that the mysterious Mark is actually Prince Markov Lakeland.

Soon to be crowned king of the young country of Shelikova, can Mark persuade Jane that she has what it takes to be his queen?

From Kiss to Queen by Janet Chapman is a romantic adventure that will leave readers falling in love. It all begins with a plane falling down from the sky. A man stuck under water from his plane crash and one bold courageous woman saving his life. She kissed his lips…releasing much-needed air into his lungs. From there, their fate became sealed. Because she rescued him…she was now in danger. The injured yet demanding man…is hot enough to make her blush and dangerous to her heart. He insists that she comes with him to his country…and it’s from there she learns his real identity. Can a woman like her fit in with his royal lifestyle or will she hide away from what they share? Janet Chapman’s writing is superb. I love her stories. Never is there a dull moment. From the first to the last page,   Janet Chapman captivates her audience by the beauty of adventure, raw chemistry, and danger. Overall, I highly recommend From Kiss to Queen to readers everywhere.