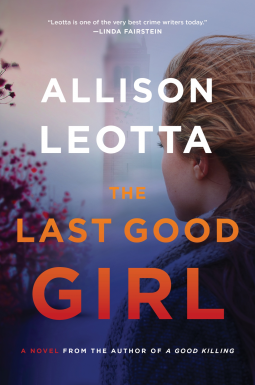 Emma, a freshman at a Michigan university, has gone missing. She was last seen leaving a bar near the prestigious and secretive fraternity known on campus as “the rape factory.” The main suspect is Dylan Brooks, the son of one of the most powerful politicians in the state. But so far the only clues are pieced together surveillance footage of Emma leaving the bar that night…and Dylan running down the street after her.

When Anna discovers the video diary Emma kept over her first few months at college, it exposes the history she had with Dylan: she had accused him of rape before disappearing.

Emma’s disappearance gets media attention and support from Title IX activists across the country, but Anna’s investigation hits a wall. Now Anna is looking for something, anything she can use to find Emma alive. But without a body or any physical evidence, she’s under threat from people who tell her to think hard before she ruins the name of an “innocent young man.”

The Last Good Girl by Allison Leotta is the most realistic crime novel I have read. The entire story circulates on things that really do happen…such as college rape. Women on college campuses have suffered continually by male students. Most whom get away with the crime. Surprisingly most women don’t bother reporting the sexual assault. The ones that don’t make it out alive never get solved…unless they have a really good investigative reporter interested and willing to do everything it takes to bring the rapist to light. However, as in the real world…politics ruin everything. They rule every move. Uncovering a rapist should not be a talk of whose politician’s son or daughter is going to be hurt by the truth but whether or not the bad guys are convicted for the crimes they commit. I found myself completely swept up into the plot. It’s fast-paced, interesting, and nails it home. The danger is a real threat whether fiction or nonfiction. The question whether or not if a college campus rapist gets away or not is one that will propel readers to keep turning the pages. Once I opened the novel, I couldn’t stop until I finished it. Allison Leotta writes a story that captivates readers…and it’s one they won’t ever forget. Addictive, brilliantly told, and a must read for all. I highly recommend The Last Good Girl to readers everywhere.