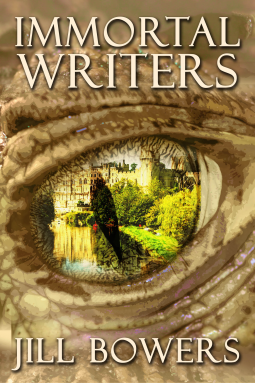 Young up-and-coming author Liz McKinnen has no idea that her life is about to change forever when she comes home from her first book tour. When she’s kidnapped and told by her captors that she has to kill her fantasy book’s antagonist, she thinks that she’s fallen into the hands of crazy, dangerous fans… until her antagonist sends a real, fire-breathing dragon after her.

Liz is quickly initiated into the Immortal Writers, a group of authors from throughout time whose words have given them eternal life, and whose prose is so powerful that it’s brought stories over from the Imagination Field into the Reality Field. As Liz meets authors such as William Shakespeare, JRR Tolkien, Edgar Allan Poe, and Jane Austen, she has to learn how to control magic, fight dragons, and face her own troubled past before her power-hungry villain takes over the world. Will she survive the ultimate battle against the dragon lord whom she created?

Immortal Writers by Jill Bowers is a sensational read. Adventure, creatures, intrigue, and suspense all wrapped into one amazing book. Imagine the characters that are created in a book suddenly come to life…and the only way to stop the bad characters is for the writer to fight the bad guys off….which is quite scary, funny, and richly entertaining. Liz McKinnen wrote such a book. After finishing her book tour she had been kidnapped by none other the hot sexy male protagonist from her book! Then meeting other famous writers and characters that one would deem are rich crazy people who need help. But are they really real of just all nuts? Jill Bowers has the raw power of drawing readers into her plot. I could not stop reading it. The story hooked me from beginning to end. The action, danger, and challenges ahead were exciting. Immortal Writers is about a bad character who makes it his mission to take over the real world. The one us human beings call home. It’s up to Liz McKinnen to save the world from her protagonist…and dragons. Overall, I highly recommend this brilliant read to all.