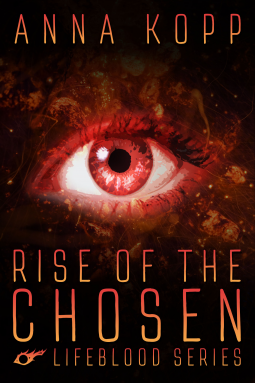 In Sam’s world, there are two rules. Rule #1: Nobody dies. Protect the living at all costs. Rule #2: Everybody dies. At least once.

The Waking was a global event in which a force called the Lifeblood invaded all humans who died. The few strong enough to control it came back as powerful immortals. The rest let the bloodlust take over and awoke with one goal – to kill.

Newly appointed Watch Guard Samantha Shields has a legacy to uphold. Her father died a hero defending their city and now she wants to follow in his footsteps. Except for the dying part, of course. Unfortunately, fate has other plans as she discovers deep dark secrets that make her choose between her loyalties and the lives of everyone in her city. Both rules are in play as Sam is forced to make hard decisions that could cost her everything – including the person she cares about most.

Rise of the Chosen by Anna Kopp is intense. There are the dead,  and the dead who walk. Then, there’s an army of individuals set on protecting the innocent. One young woman lost her dad and then her mother. After the loss of her mother, Sam was promoted to the highest level of fighting. Her boyfriend ends up being killed but issues out a warning to her. Then, she and her new teammates are preparing to fight a battle. One that is about to break out and only time will tell what happens next.

Rise of The Chosen was well-written. The main character, Sam, is a lesbian. So there’s plenty of F/F action happening. The tale is fast-paced. Packed with tons of action, tough choices, and fighting. Death is everywhere inside this novel. Losing the only family Sam had is a tough emotional journey. Then she also loses a past boyfriend that she cared about like a friend. Work is tough especially when the leading female didn’t have time to prepare or work her way up to the highest level. Lots of science fiction fantasy themes can be found in this exciting read. Anna Kopp is a talented writer. I was fascinated by her book about the dead and the war at hand.