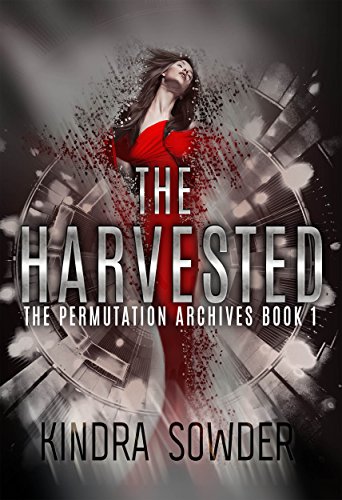 There are only a few things Mila is afraid of. Most are pretty common fears, but there is one that sets her apart from those around her. The fear of a secret. With one drop of blood, her secret of a power beyond anything anyone had ever seen before is unleashed, landing her in a place where she is a prisoner. And an experiment. And there are only a few that know their dictator’s ultimate goal. Some are willing to save her, others want to exploit her for their own dark and sinister intentions, and it is up to her to stop them before it’s too late.

Harvested by Kindra Sowder is by far her greatest work to date. This urban fantasy sucks readers in fast. The action is thrilling…I felt fear and wasn’t sure what to expect. All I knew was that something bad was about to happen to the main character. Then, just when I thought maybe the fear would subside, the worst happened. Just like the main character, Mila, feared would happen. Sooner or later she knew they would come for her. Because of what she can do. Sleep wouldn’t come knowing that at any moment they were coming for her. Not knowing when nor how adds to the suspense of this spectacular read. I found myself lured deep into this dark world. The unknown keeping me on the edge of my seat…

A girl is soon taken into a facility where experiments and all are done. Mila is soon taken as a hostage and kept on like a lab rat. She has a power that they want from her…the question of who will survive or win this war is something I highly recommend readers to read on their own. Kindra Sowder has a power that is raw and magnetic. Readers will forever be trapped inside of her fantasy world and hanging onto every one of her words. I was deeply satisfied with this brilliantly well-written masterpiece. The desire, no, the need to read her next book, is so strong that it’s incredible. Kindra Sowder can wrap her readers around her finger and keep them hostage in her books. Absolutely, loved this new adventure.  Can’t wait for the next novel. Overall, I highly recommend this page turner to all. Harvested is definitely a must read for all.