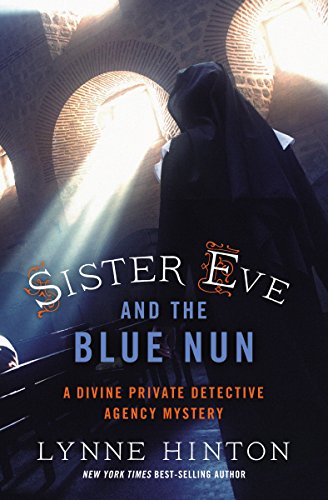 After a murder at the monastery, Sister Eve may need a miracle if she is to prove a dear friend isn’t a cold-blooded killer.

Sister Eve, a motorcycle-riding nun with a natural (or is it supernatural?) gift for solving murders returns to the enclave she once called home and quickly finds herself confronting yet another mysterious death.

Someone has poisoned Dr. Kelly Middlesworth—a researcher on the life and ministry of 17th-century’s revered “Blue Nun”—and a set of irreplaceable historic documents have disappeared before they could even be examined.

When all evidence seems to point to the victim’s brother, Sister Eve sets out to expose the killer and learn the explosive truth those missing manuscripts might contain.

Chasing a killer is dangerous work, and as her two worlds collide, Sister Eve may need some heavenly help simply to survive.

Sister Eve and the Blue Nun by Lynne Hinton is the first novel that I have read in the series. It instantly intrigued my interest. A motorcycle nun who has the habit and skills to solve murders. That sentence alone popped up an image that I couldn’t fathom. Yet…inside this mystery I was soon able to see and understand it. With all the stories I have heard about nuns, in particular, this fictional novel peeked my curiosity…and boy was I glad it did.

Lynne Hinton’s murder mystery is set at a monastery where a nun’s friend is being charged as the killer. Knowing the friend isn’t the cold-blooded killer, Sister Eve sets out to find who is. A researcher looking at very old documents is soon murdered. The very old  documents are missing and an innocent person’s life is at stake. Sister Eve and the Blue Nun is full of danger, intrigue, and excitement. Lynn Hinton keeps readers on their toes and guessing until Sister Eve reveals who the murderer actually is. I loved the suspense. I thought at one moment Sister Eve wasn’t going to make it alive and then she did…at least out of that tough situation but the story doesn’t end after that. Readers will love this novel as much as I did. I haven’t read books one and two and yet I was able to read this one just fine. Overall, I highly recommend Sister Eve and the Blue Nun to readers everywhere.