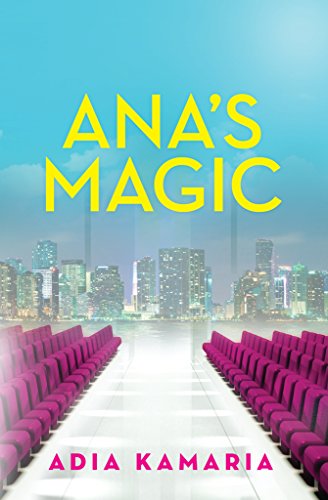 How far are you willing to go to make your dream a reality? For Ana Wright, the answer to this question is, all the way!

“Ana’s Magic” is a page-turner that tells the story of Ana Wright. A young girl who loses everything, including her close bond with her family due to unfortunate circumstances and a little stubbornness of her own. She is forced to make the intense transition from girl to woman in what seems like the blink of an eye. She finds herself alone, deprived and disheartened with her long anticipated childhood dream seeming far out of reach.

Suddenly, Ana’s life takes an unexpected turn and she finds herself living a lifestyle filled with glitz, glamor and everything in between. Lost in the allure of the high life, “Miami Beach style”, she quickly learns that everything that glitters isn’t gold. Still, she is determined to make her dream a reality, even if it kills her.

Follow Ana on a journey to where glamor meets the streets, love turns bitter and dreams come true.

Ana’s Magic by Adia Kamaria is an intriguing read. Where those with dreams and ambition work hard to make it all come true. But soon things go down south. Family life isn’t what is was. A father who became a drug dealer to give his family especially his little girl everything they wanted. But as with all bad jobs…the high life lasts only so long until it’s destroyed. Ana’s father and another man are soon sentenced to prison for a long time. Her mother is wanting to move back to Jamacia with her kids. The two sons are going with their mother but Ana doesn’t want to go. Her mother is asking her to give up her dreams to go back to the place they came away from…to open up a grocery store. No way! Anger, confusion, and worry creep up within this read. A family who went through tough times are now, facing them again. Finding a school to finish her fashion studies and a place to live are seeming like an impossible reality…but Ana is determined to try. But will she end up failing or making it to the top?

Ana’s Magic is full of drama, crime, and heat. The fashion world is a lot harder than readers think. Working one’s way up costs money and money is the one thing that the main character was running out of…this seemed to cause her to get involved with people who were in bad businesses like her father and uncle were. There’s plenty of adult content with this exciting read. Readers can easily connect with Ana. A character who held bigs dreams and kept on chasing them even when things got tough. Adia Kamaria writes well. There’s never a boring moment. Her characters pop off the pages and entice readers. The big question in this novel is how far is one willing to go for their dreams. Overall, I enjoyed this urban street read and recommend it to all.