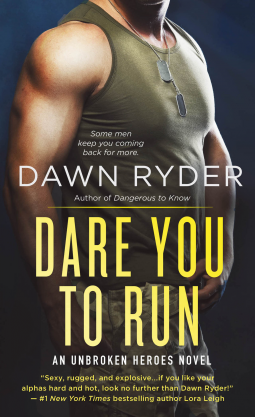 Dawn Ryder returns with Dare You To Run, the second rapid-fire romance in her Unbroken Heroes series—featuring the tough, sexy men who serve in a top-secret Special Ops unit.

SERVE AND PROTECT
For Vitus Hale, only one mission has ever gone wrong. All he had to do was rescue a beautiful woman from her kidnappers. But falling hard into bed—and into love—with the stunning innocent was not part of the game plan, and when she leaves him in the dust, Vitus has nothing but a blemished record and a hardened heart. Now, after three long years, his beauty has finally come back into his life—and this time, failure is not an option…

SEDUCE AND DESTROY
Damascus Ryland knew from their first steamy embrace that stoic warrior Vitus Hale is the only man for her, but when her power-hungry Congressman father offered her an ultimatum—sever ties with Vitus, or he dies—Damascus knew she had to walk away to save the man she loved. But now, three years later, a new threat is closing in on her—and tossing Vitus right back into her life. Damascus needs to keep her love for him locked in her heart if she is to keep him safe, but the old flame that burned between them is still as vibrant and hot as ever. Now, Damascus and Vitus must risk it all to find their freedom…and embrace their love…

Dare You to Run by Dawn Ryder was incredible. This magnificent yet fast-moving plot will entice readers instantly. I was enchanted from beginning to end. Sexy hot alpha fighting heroes and sexy smart heroines will lure me in every time. Danger, heat, and passion. Dare You to Run is exactly that. A young woman is in danger from a lot of evil men including her political father. A man who doesn’t mind putting his wife and daughter into a private mental hospital just so that he can achieve his political dreams. His daughter doesn’t want to live her life doing what her father pressures her into…and that leads her to trouble. The first time she was captured and tortured, a sexy irresistible navy seal, Vitus Hale. He’s a man that would haunt men’s nightmares and make every woman melt into a puddle of goo. His attractiveness isn’t lost on the woman he rescues. Neither is her beauty and tough attitude lost on him. Something between them stirs…and once they have their taste…letting each other go isn’t an option. But Damascus’s father isn’t done with her or the navy seals willing to protect her. Dawn Ryder definitely knows how to write a romance that will not only soar off the charts but also, keep readers coming back to read time and time again. Overall, I highly recommend this top secret mission to all.