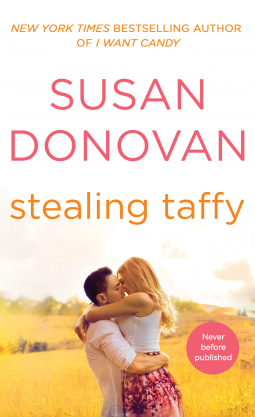 Ten weeks in a swanky Arizona rehab center and Tanyalee Newberry, aka Taffy, is ready to give up everything that isn’t good for her—her forgery habit, taking (i.e., stealing) things that don’t belong to her, and, of course, men. But when her flight home gets rerouted, she finds herself in a hotel room with her smoking-hot travel companion. One night together is all it should have been. But passion is oh-so sweet…

Special Agent Dante Cabrera has been duped at his own love-’em-and-leave-’em game by this so-called Taffy. To forget she ever existed, Dante buries himself in his work…until a case leads him to North Carolina and, impossibly, right back to her. He has no business messing around with this felonious femme fatale, especially one who could be in more danger than she thinks. But Dante also knows there’s more to her than great looks and hot nights—a soul-searching woman who wants amend her past sins. Is he ready to take their desire to the next level…and steal Taffy’s heart?

Stealing Taffy by Susan Donovan is a fabulous adventure for all readers to lose themselves within…imagine going to the airport and seeing the most attractive man around…one that leaves you staring and staring at him forever until he meets your gaze and suddenly you’re caught. Fate is a funny thing. After coming out of the women’s bathroom almost late for the plane ride…Taffy is seated next to the hot man she was caught checking out moments before the plane ride. The federal agent thought he would be stuck next to a fat sweaty man and instead he was sitting next to a gorgeous woman. Her hair was a reddish color and she was wearing some shade of pink. Once she sits down she talks nonstop. But Dante doesn’t care. He thinks she’s stupid because she asked where Brooklyn was located and he found out that she might be super crazy. Got shoplifting, writing checks, and a lot of other issues. Taffy thinks Dante is super hot and she would love nothing more than to bed him. However, she’s trying to stay away from all men and make up for her life’s mistakes. But then the weather had to bed and they both end up doing what they shouldn’t.

Stealing Taffy is hilarious, sexy, and sweet. There is never a boring moment with Taffy around. She has a lot of mistakes to apologize for and the one she isn’t looking forward to is her sister. Both lost their parents and have since then made life hell for each other. However, Taffy made life worse for her sister, grandpa and a bunch of others. Including a jealous ex who is worse than originally mentioned. The heated chemistry between the federal agent and a woman with a felony is undeniably out of this world. Neither one can get the other out of their thoughts. Taffy is well-mannered, southern belle, and pretty. She can be mega tough and super sweet. I enjoyed following Taffy’s adventures and Dante’ step towards accepting his feelings for Taffy. Overall, I highly recommend this romance to all.