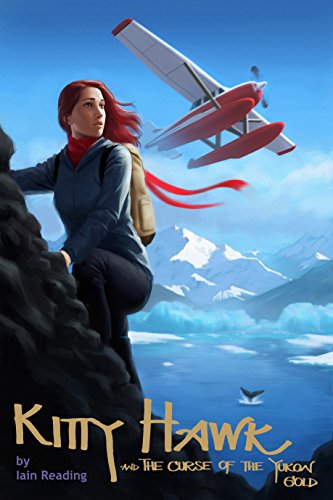 Kitty Hawk and the Curse of the Yukon Gold is the thrilling first installment in a new series of adventure mystery stories that are one part travel, one part history and five parts adventure. This first book of the Kitty Hawk Flying Detective Agency Series introduces Kitty Hawk, an intrepid teenage pilot with her own De Havilland Beaver seaplane and a nose for mystery and intrigue. A cross between Amelia Earhart, Nancy Drew and Pippi Longstocking, Kitty is a quirky young heroine with boundless curiosity and a knack for getting herself into all kinds of precarious situations.

After leaving her home in the western Canadian fishing village of Tofino to spend the summer in Alaska studying humpback whales Kitty finds herself caught up in an unforgettable adventure involving stolen gold, devious criminals, ghostly shipwrecks, and bone-chilling curses. Kitty’s adventure begins with the lingering mystery of a sunken ship called the Clara Nevada and as the plot continues to unfold this spirited story will have armchair explorers and amateur detectives alike anxiously following every twist and turn as they are swept along through the history of the Klondike Gold Rush to a suspenseful final climactic chase across the rugged terrain of Canada’s Yukon, the harsh land made famous in the stories and poems of such writers as Jack London, Robert Service, and Pierre Berton. It is a riveting tale that brings to glorious life the landscape and history of Alaska’s inside passage and Canada’s Yukon, as Kitty is caught up in an epic mystery set against the backdrop of the scenery of the Klondike Gold Rush.

Kitty Hawk and the Curse of the Yukon Gold is a perfect book to fire the imagination of readers of all ages. Filled with fascinating and highly Google-able locations and history this book will inspire anyone to learn and experience more for themselves as Kitty prepares for her next adventure – flying around the world!

Kitty Hawk and The Curse of the Yukon Gold by Ian Reading is fun, exciting, and full of adventure. This novel is highly engaging from the first moment to the last. There’s never a dull moment with the main character, Kitty Hawk. Right away she’s experiencing trouble. Flying a plane…can be scary especially when it runs out of fuel. Imagine being up high in the air…your fuel tank empty when it says it still has fuel. Then your radio is fried….and you’re trying not to panic. Ian Reading inserts a lot of mystery, intrigue and humor into this tale. Kitty Hawk is someone I would not want to travel with for it seems she is always having the case of bad luck. Not only is the novel highly entertaining but also, like a travel and historical guide. Exploring, surviving, and theft of gold will keep readers on the edge of their seats filled with anticipation of what’s happening next. This was the first novel I have read by Ian Reading and love it. I couldn’t stop reading until I reached the last page. Overall, this is one fictional world I highly recommend to readers worldwide.