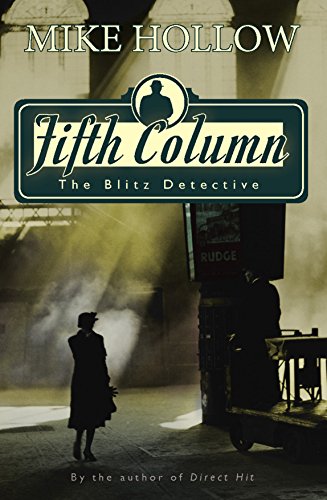 The neat row of small, late-Victorian terraced houses was punctuated by a gaping space: homes reduced to rubble in the night raid. Among the debris the body of a young, red-headed woman is found. But she has no connection to the houses or the street, nor can her identity be established. Nor was it the bomb that killed her. When the post-mortem reveals death by strangling, D.I. Jago is called on to investigate. He quickly establishes that the body is that of Mary Watkins, a seemingly respectable employee of a local engineering company. But the company is missing important chemicals, and few seem to really care about the death of Mary – not even her family. Was the young woman all she appeared to be? As Jago digs deeper he starts to uncover a trail of deception, betrayal, and romantic entanglements…

Mike Hollow’s novel, Fifth Column, is an intriguing mystery with tons of suspense. The story wraps readers into a murder mystery. This highly entertaining yet suspenseful read reminds me of two detective shows of mine that I love. It reminds me of Miss Fisher’s Mysteries and Detective Murdoch. The tale takes readers deep into London during WWII. a frightening and chaotic time for a crime to happen. Here, there will be bombing and then a murder case that detective Jago must solve. Mike Hollow’s writing is engaging. I found myself piqued about the characters and cases at hand. I wondered who and why and how. Fifth Column reads like old crime fiction novels that instantly become ones favorite and never go out of style. The danger, suspense, and the suspects were fun to follow along. I thoroughly enjoyed reading this detective mystery. Detective Jago has officially been added to my favorite detectives. There are a lot of themes combined within this read. A bit of romance, secrets, lies and much more.  Overall, I highly recommend this well-developed tale to readers everywhere.