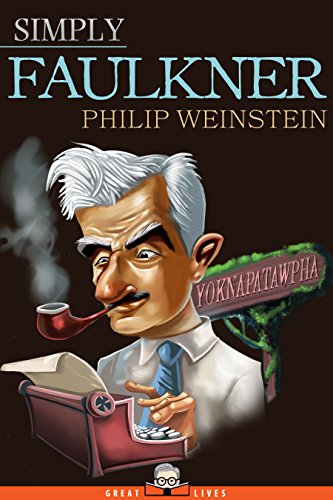 Nobel Laureate and two-time Pulitzer Prize-winner William Faulkner (1897–1962) was one of America’s greatest and most celebrated writers, whose work reflects and, at the same time, questions the South’s most deeply held values. His novel The Sound and the Fury is frequently cited as one of the best books of all time, and all of his works powerfully explore complex societal and family issues that continue to be relevant in our own day. Yet, because of his decidedly difficult, stream-of-consciousness style, Faulkner’s books remain sadly unknown to many readers.

In Simply Faulkner, author Philip Weinstein not only helps us understand these challenging works, but also explains why Faulkner had to write them as he did, in an effort to capture the sheer abundance and unruliness of life. Further, in his exploration of the author’s own colorful life—including decades of working for a film industry he despised—Weinstein reveals a fascinating connection between Faulkner’s troubled personal biography and his groundbreaking fiction.

The goal of Simply Faulkner is not to simplify the author, but, rather, to create a framework that allows us to comprehend him in his own idiosyncratic way. It strives to show us the real Faulkner—warts and complications and all—and to demonstrate why his brilliant masterpieces still speak to us in a deeply meaningful way.

Simply Faulkner by Philip Weinstein is an exploration into Faulkner and his life as he grew up in the South. Faulkner took what was happening around him and his feelings on these matters and portrayed into his poetry and fiction. The time periods of when Faulkner was born and where he grew up deeply shows readers why Faulkner wrote the way he did. This was book was a great way to dive into the famous writer’s life, background, and history. The writing was super easy to understand and follow along. Faulker instantly became more than just a mastery legend writer. Here, he became a man growing through and witnessing life as we know it to be. His frustrations at the lie around him clearly popped up within all of his writings where he could share them with the world. Simply Faulkner is a brilliant nonfiction book. Both education and entertaining. I was immediately fascinated with Faulkner, his writings, and his background. Philip Weinstein has woven a journey that readers will take part in time after time. Truly an unforgettable portrait of a well-known writer and poet captured in this book. Overall, I highly recommend this read to readers everywhere.