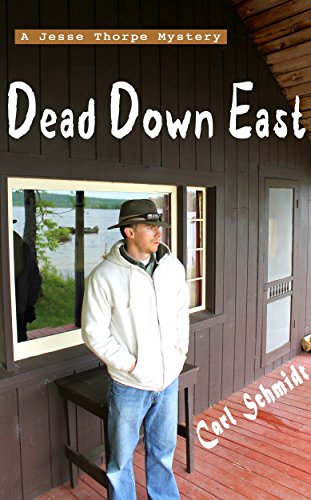 Dead Down East, a fictional murder mystery, is both detective noir and smart screwball comedy rolled into one. Jesse Thorpe, a young private investigator operating out of Augusta, Maine, receives a mysterious phone call from a former client, Cynthia Dumais. She begs to be rescued from an island south of Brunswick, within a mile of where William Lavoilette, the governor of Maine, was assassinated the night before. She insists that her life is in danger, but is unwilling to provide any further information. Reluctantly, he goes to fetch her.

Fresh, witty and loaded with eccentric characters, this first novel in the series is both clever and stylish. It’s an old-school private eye tale with inventive twists and local color. If you enjoy a well-crafted and zesty narrative, lively banter, or take pleasure in the company of Mainers, you’ll love Dead Down East.

Dead Down East by Carl Schmidt is a mystery readers everywhere won’t be able to get enough of…especially of the man character, Jesse Thorpe. I am hoping there’s going to be more books out soon. Otherwise, I will go bat crazy trying to come up with new adventures this new detective will engage. Absolutely, the most charming, hilarious, and intriguing detective noir that I have read. This is a new series, I would recommend to all.

Carl Schmidt’s writing is that of a seasoned writers. Words that make me want to dig further and solve the case as well as find out more about Jesse Thorpe. Dead Down East holds murder, humor, and a mystery unlike any other. The danger is real. Plus, there’s some steamy scenes. The characters will blow away readers’ minds. Jesse Thorpe goes on a mission to rescue a woman who is in danger. She happens to be in the same area that someone else was recently assassinated. Jesse Thorpe goes about finding the murdering weapon, theft, has the DNA of an accomplice for the murder. If the accomplice can be found and interrogated the murder might just be within reach…but it all depends on if, when, and how. Every page is filled with action of some kind. I thoroughly enjoyed reading this novel.