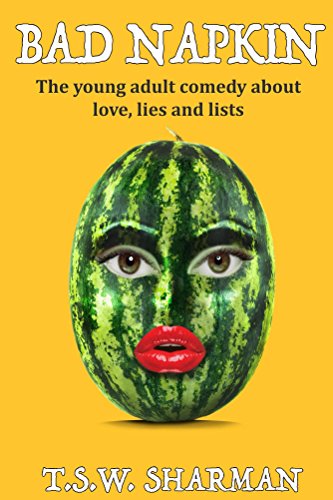 The young adult comedy about love, lies and lists.

“. . .this delightful, quirky book . . . A zany and satisfying story for fans of YA tales that pack as much humor as they do heart.” – Kirkus Reviews (starred review)

When Sophy’s backpack is turtled, Russ finds a plus-minus list on a napkin stuck to the bottom of a copy of The Catcher in the Rye. He knows with certainty Sophy wrote it about him. Except Julie wrote it about her boyfriend Freddie, the school’s oddly sexy football quarterback. Russ decides to change himself to save his relationship with Sophy. But then he writes his own plus-minus list about her in revenge. And that’s when things start to go very wrong.

Sophy’s research project. Julie’s list on a napkin. A terrible discovery. Feeble self-improvement. Horrifying betrayal. The McRib. A watermelon named Brittany. A cyber-wedgie. A cactus-wedgie. A beautiful girl with a foul mouth. A foul girl with a beautiful mouth. And love. And kissing – lots and lots of kissing (with perhaps a bit too much tongue at times).

Bad Napkin by T.S.W. Sharman is a hilarious read that will bring readers in every time. I thoroughly enjoyed this laugh-out-loud title. The characters were a variety of kinds that made the plot juicy and ripe. Teenagers whose struggles and perfections made them interesting individuals. A popular girl ends up in a super awkward situation due to a friend of hers taking a list that was written about a terrible boyfriend. It was about Julie’s boyfriend…except Russ, who likes Sophie thought it was about him. So, he then decides to improve himself for her. But what happens next is a dramatic roller-coaster full of ups and downs as well as love. T.S.W. Sharman writes a charming novel that will keep readers coming back time and time again. Themes like being young, finding love, and friendship can be found within this stunning novel. I absolutely loved following the characters’ growth as the story unfolded. The mood swings were crazy but in a realistic yet believable way. Overall, Bad Napkin is a definite must read for readers everywhere.