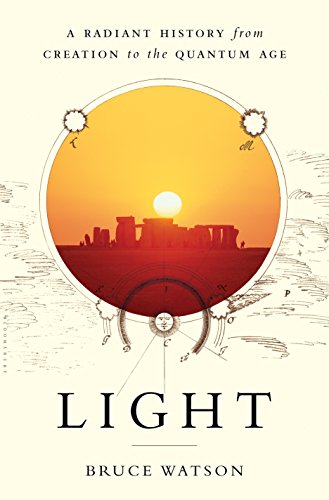 Light begins at Stonehenge, where crowds cheer a solstice sunrise. After sampling myths explaining First Light, the story moves on to early philosophers’ queries, then through the centuries, from Buddhist temples to Biblical scripture, when light was the soul of the divine.
Battling darkness and despair, Gothic architects crafted radiant cathedrals while Dante dreamed a “heaven of pure light.” Later, following Leonardo’s advice, Renaissance artists learned to capture light on canvas. During the Scientific Revolution, Galileo gathered light in his telescope, Descartes measured the rainbow, and Newton used prisms to solidify the science of optics. But even after Newton, light was an enigma. Particle or wave? Did it flow through an invisible “ether”? Through the age of Edison and into the age of lasers, Light reveals how light sparked new wonders–relativity, quantum electrodynamics, fiber optics, and more.

Although lasers now perform everyday miracles, light retains its eternal allure. “For the rest of my life,” Einstein said, “I will reflect on what light is.” Light explores and celebrates such curiosity.

The Light by  Bruce Watson is a phenomenal read. This book covers everything about Light. Light has always gotten the best of our curiosity. Light can be many things and taken in many different ways. I was amazed at all of the topics covered about light in this title.  From science to history perspectives on light…readers will not only be informed, educated, but also entertained. Fans of history will immediately love this book as much I have reading it. Then there’s the fact that humans have yet to know all there is about light. Measuring it, to capturing it, and then to creating our own light. Many well-known names of scientists and others are mentioned throughout the book. Instantly upon having opened Light, I have gone on a journey of rediscovering and understanding it in more than one way. Bruce Watson has wonderfully crafted an exciting and refreshing detailed book on light. Overall, I enjoyed reading it and highly recommend it to all.