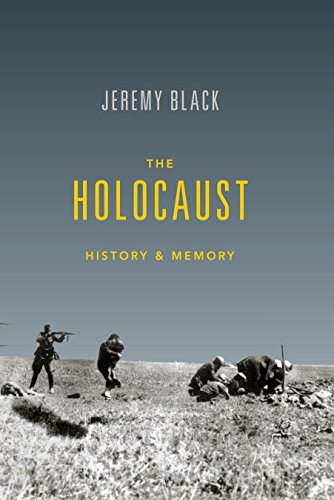 Brilliant and wrenching, The Holocaust: History and Memory tells the story of the brutal mass slaughter of Jews during World War II and how that genocide has been remembered and misremembered ever since. Taking issue with generations of scholars who separate the Holocaust from Germany’s military ambitions, historian Jeremy M. Black demonstrates persuasively that Germany’s war on the Allies was entwined with Hitler’s war on Jews. As more and more territory came under Hitler’s control, the extermination of Jews became a major war aim, particularly in the east, where many died and whole Jewish communities were exterminated in mass shootings carried out by the German army and collaborators long before the extermination camps were built. Rommel’s attack on Egypt was a stepping stone to a larger goal—the annihilation of 400,000 Jews living in Palestine. After Pearl Harbor, Hitler saw America’s initial focus on war with Germany rather than Japan as evidence of influential Jewish interests in American policy, thus justifying and escalating his war with Jewry through the Final Solution. And the German public knew. In chilling detail, Black unveils compelling evidence that many everyday Germans must have been aware of the genocide around them. In the final chapter, he incisively explains the various ways that the Holocaust has been remembered, downplayed, and even dismissed as it slips from horrific experience into collective consciousness and memory. Essential, concise, and highly readable, The Holocaust: History and Memory bears witness to those forever silenced and ensures that we will never forget their horrifying fate.

The Holocaust: History & Memory by Jeremy Black is one that I will forever behold. This book contains so much history and memories during one of the most horrifying moments in history. Jeremy Black has brilliantly put together a great study of the Holocaust for readers everywhere to revisit and learn. His writing is direct, concise, and very detalied. I am never giving up this book. There is so much to read. The information contained in this reading material is stunning. I was surprised it wasn’t thicker with all that was inside of it. The journey back in time and across nations and other countries was remarkable. The Holocaust always brings up the dreaded nightmares and terrors that noone wants to remember. All the innocent lives that were taken in mass killings is something that all should never forget. We need to be reminded of the hows and why and to learn that we shouldn’t ever allow something like that to occur ever again. The Holocaust: History & Memory is a strong and superb book. I highly recommend this read to all. Jeremy Black’s work is one to take seriously and read.Educational, informative, and a remembrance of such nightmares…