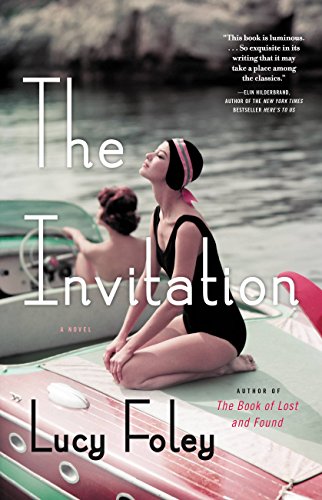 An evocative love story set along the Italian Riviera about a group of charismatic stars who all have secrets and pasts they try desperately–and dangerously–to hide.

Rome, 1953: Hal, an itinerant journalist flailing in the post-war darkness, has come to the Eternal City to lose himself and to seek absolution for the thing that haunts him. One evening he finds himself on the steps of a palazzo, walking into a world of privilege and light. Here, on a rooftop above the city, he meets the mysterious Stella. Hal and Stella are from different worlds, but their connection is magnetic. Together, they escape the crowded party and imagine a different life, even if it’s just for a night. Yet Stella vanishes all too quickly, and Hal is certain their paths won’t cross again.

But a year later they are unexpectedly thrown together after Hal receives an invitation he cannot resist. An Italian Contessa asks him to assist on a trip of a lifetime–acting as a reporter on a tremendous yacht, skimming its way along the Italian coast toward Cannes film festival, the most famous artists and movie stars of the day gathered to promote a new film.

Of all the luminaries aboard–an Italian ingenue, an American star, a reclusive director–only one holds Hal in thrall: Stella. And while each has a past, that belies the gilded surface, Stella has the most to hide. As Hal’s obsession with Stella grows, he becomes determined to bring back the girl she once was, the girl who’s been confined to history.

An irresistibly entertaining and atmospheric novel set in some of the world’s most glamorous locales, THE INVITATION is a sultry love story about the ways in which the secrets of the past stay with us–no matter how much we try to escape them.

The Invitation by Lucy Foley is a historical romance story set in the 1950’s. Its tale takes readers deep into the darkness that surrounds the characters. Regret, sorrow, and loss. But even with that, there was also, the luxury of lives lived in glamorous ways. Rich, fascinating, and enticing. Lucy Foley magnificently creates, a world in which readers want to dive into time and time again. The emotional journey is one that baits and hooks readers deeper into the plot. Moving back and forth dipping into each character’s life so as to give readers a clearer picture of who they are. The mystery behind the characters and their dilemmas is fascinating to watch. This book is like a moving picture. The Invitation brings a realistic yet romantic story that nails me to its pages. A search for redemption and love is so great that I simply couldn’t put the book down…to stop reading. I highly recommend this to fans of historicals, romances, and family sagas. Lucy Foley is indeed a talented writer.