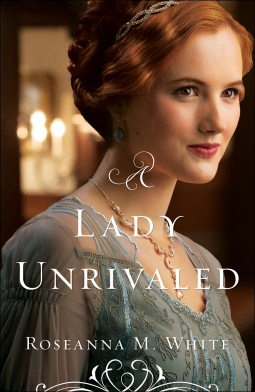 Lady Ella Myerston can always find a reason to smile–even if it’s just in hope that tomorrow will be better than today. All her life everyone has tried to protect her from the realities of the world, but Ella knows very well the danger that has haunted her brother and their friend, and she won’t wait for it to strike again. She intends to take action . . . and if that happens to involve an adventurous trip to the Cotswolds, then so much the better.

Lord Cayton has already broken two hearts, including that of his first wife, who died before he could convince himself to love her. Now he’s determined to live a better life. But that proves complicated when old friends arrive on the scene and try to threaten him into a life of crime. He does his best to remove the intriguing Lady Ella from danger, but the stubborn girl won’t budge. How else can he redeem himself, though, but by saving her–and his daughter–from those dangerous people who seem ready to destroy them all?

A Lady Unrivaled by Roseanna M. White is an intriguing tale. One that involves a rather handsome Lord that he believes incapable of falling in love. He claims he’s not a good man yet he proves the exact opposite. His actions speak louder than his words. Then fate has to bring in a beautiful smiling always positive woman into his life. For the life of she can’t stop thinking about the handsome yet charming Lord. Despite his efforts to keep her at bay. But there’s something more dangerous at play that will entangle them deeper into each others’ life. A dangerous man among their midst. Dead bodies found and yet anohter death is at play. Can they both the dashing Lady and the Lord stop the evil at hand or risk losing everything? A Lady Unrivaled is exactly that. I loved the suspense, intrigue and banter between Lord Clayton and Lady Ella. Both are amusing characters. Roseanna M. White knew exactly how to charm her readers into falling for both of her characters. The ending was surprising. Overall, I highly recommend this brilliant historical romance to all.