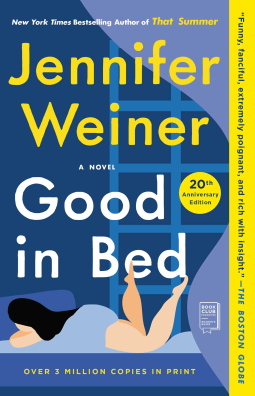 For twenty-eight years, things have been tripping along nicely for Cannie Shapiro. Sure, her mother has come charging out of the closet, and her father has long since dropped out of her world. But she loves her friends, her rat terrier, Nifkin, and her job as pop culture reporter for The Philadelphia Examiner. She’s even made a tenuous peace with her plus-size body.

But the day she opens up a national women’s magazine and sees the words “Loving a Larger Woman” above her ex-boyfriend’s byline, Cannie is plunged into misery…and the most amazing year of her life. From Philadelphia to Hollywood and back home again, she charts a new course for herself: mourning her losses, facing her past, and figuring out who she is and who she can become.

Jennifer Weiner has a way with creating just the right atmosphere that will hook and captivate her readers. I found myself relating to the main character’s flaws especially regarding her issues with weight. I still struggle with that part and after reading this novel, it was like a reminder saying, “Love yourself. If you love yourself so will others.” The emotional journey was deep and left me really thinking about stuff. The story itself was hilarious, sad, and frustrating at times. Afterall, the woman was going through relationship issues and then having gone through pregnancy without the baby’s father around to support her. Truly a realistic outlook on life, love, and relationships. I could easily see the characters acting and saying the things that I read about…I felt inspired by the main character. At first she was insecure of herself, and it took her a great time to realize that she was okay just the way and who she has been all those years. Sweet, well-developed, and brilliant. Good in Bed is a definite read for all.

Good in Bed by Jennifer Weiner was the first novel that launched her amazing career. After reading it, I could see why. It has everything. Humor, emotional journey, and a believable character. Here, I have met an editor. One that found out from her best friend that her ex-boyfriend wrote an embarrassing article about that millions of readers read. She then did what any sane angered woman would do. Yell at the stupid freaking ex-boyfriend. The thing was she told him she wanted a break. He took that as a ‘I’m breaking up with you’…and so, he wrote about their sex life. Oh wait…he also, called her fat. Not just fat, but fatter than him. Yep. Just like that the main character went from bat angry to depressed rather quickly. But her life just got crazier…her mom has a sprung an enormous surprise on her daughter. Not just anywhere but told her daughter while at the office. Last, of all, the main character found out that she’s pregnant with her ex boyfriend’s baby. The novel kept getting more intense with every page turned. I absolutely loved reading it. I highly recommend all women to read this laugh-out-loud romance.