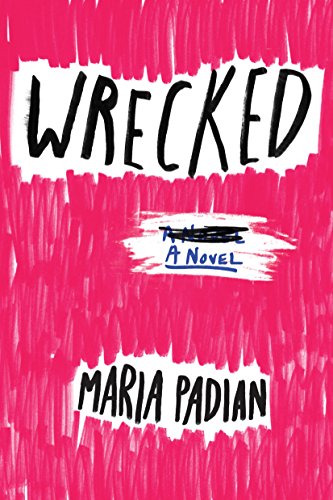 Everyone has heard a different version of what happened that night at MacCallum College. Haley was already in bed when her roommate, Jenny, arrived home shell-shocked from the wild Conundrum House party. Richard heard his housemate Jordan brag about the cute freshman he hooked up with. When Jenny formally accuses Jordan of rape, Haley and Richard find themselves pushed onto opposite sides of the school’s investigation. But conflicting interests fueling conflicting versions of the story may make bringing the truth to light nearly impossible–especially when reputations, relationships, and whole futures are riding on the verdict.

Maria Padian offers a kaleidoscopic view of a sexual assault on a college campus. Wrecked will leave readers thinking about how memory and identity, what’s at stake, and who sits in judgment shape what we all decide to believe about the truth.

Wrecked by Maria Padian was indeed the perfect title for this new adult tale. I found the characters completely wrecked whether physically or emotionally. Then there was the usual college peer pressure to add to the mix. This story told about a sad, dark, and unforgettable situation. Alcohol and rape. Typical to most college students. Yet despite the awareness of such things…students still made mistakes. Like, take a perfect academic girl that comes from a wealthy family whom nobody really notices. Then, she takes it upon herself to accept an invitation from a complete stranger. Not only that but an invite to a party known for excessive drinking mixes and hookups. But something more sinister than just a hookup happens to this particular student. Next, there’s this other wealthy college student who has taken advantage of the female while she was drunk or still tipsy from whatever was in her drink.

Once she claims rape from him, everything went downhill. The board found that the woman’s events weren’t adding up but that she was indeed telling the truth about being raped. However, with no witnesses or any evidence nothing can be done or can it? Despite all this trouble, readers will meet two awesome characters. The lead female character was an excellent soccer player up until her third concussion. She ended up meeting her roommate’s ex. The guy who happens to be her math tutor. But he’s the kind of guy that’s easy on the eyes yet wants the forever thing with a woman. But just as things start to click between them, both end up defending the person on each side of the rape case. Let the questions begin…and let fate take the characters where they should be. I found this fictional novel to be entertaining but also, play out an important message to young adults. It spoke out loudly about rape, alcohol, and using consent. Great advice and tips dipped masterfully into a stunning read. Overall, I highly recommend Wrecked to readers worldwide.