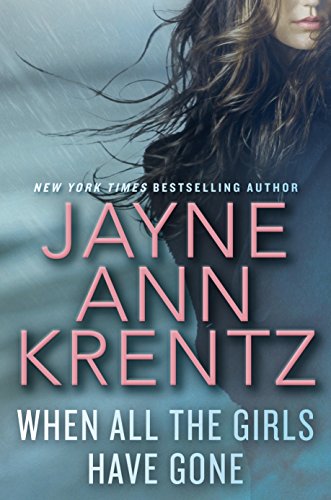 When Charlotte Sawyer is unable to contact her stepsister, Jocelyn, to tell her that one of her closest friends was found dead, she discovers that Jocelyn has vanished.

Beautiful, brilliant—and reckless—Jocelyn has gone off the grid before, but never like this. In a desperate effort to find her, Charlotte joins forces with Max Cutler, a struggling PI who recently moved to Seattle after his previous career as a criminal profiler went down in flames—literally. Burned out, divorced and almost broke, Max needs the job.

After surviving a near-fatal attack, Charlotte and Max turn to Jocelyn’s closest friends, women in a Seattle-based online investment club, for answers. But what they find is chilling…

When her uneasy alliance with Max turns into a full-blown affair, Charlotte has no choice but to trust him with her life. For the shadows of Jocelyn’s past are threatening to consume her—and anyone else who gets in their way…

When All the Girls Have Gone by Jayne Ann Krentz is a cozy romantic mystery with a lot of humor. I have read a few of Jayne Ann Krentz’s novels, but this latest one hooked me. The characters were fascinating to watch in action. Their easy-going nature and troubles were interesting. They fit in together like a jigsaw puzzle. Both main characters had lived lives that changed them. Apparently, it seemed to change them both in a positive way. One escaped a fire and was adopted the other was dumped before her wedding and left with bills to pay off…both have issues. Real life issues.It was easy to connect with them on many levels. The way life pulls the rug from under their feet kind of theme also rings true in real life. I love how realistic everything played out inside this book. The PI investigator’s timing and knack for gut instincts in finding out stuff were incredible. Yet he seems to put doubt, in his gut, when it comes to a more personal reason. This causes him to wonder and it eats him alive. Anyone placed in this man’s shoes would have questions as well as doubts. Then, there’s the leading female character who believed in him. This sort of gave him a piece over his internal conflicts. Plus, the instant chemistry between the two satisfying. Two sisters are involved in a dangerous situation. One left thinking she was protecting her sister and friends. Turned out that she was wrong. Instead, she and her sister will be reunited under dire circumstances and it will be up to the PI investigator to get them both before it’s too late…When All the Girls Have Gone is an intriguing, suspenseful, yet wonderful journey. One that readers won’t resist. I loved reading it. Every page had some kind of action that intrigued me. Kept me turning those pages. When I reached the ending, I was very glad I read this book. Overall, Jayne Ann Krentz’s novel is a must read for all. I highly recommend it.