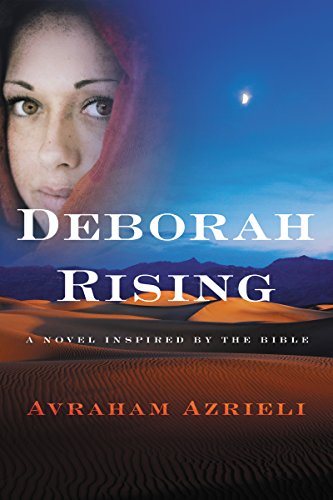 Set in ancient Israel, Deborah Rising (HarperCollins, 2016) portrays the dramatic (and unlikely) rise of the first woman to lead a nation in recorded human history. In the tradition of The Red Tent, The Fifth Mountain, and The Mists of Avalon, this absorbing novel delivers an inspiring story of suspense and adventure in pursuit of freedom and self-determination, starring a courageous 14-year-old girl who would become the most powerful woman in biblical lore.
Before he was murdered, Deborah’s father had dreamt that his daughter would one day become the leader of the Israelites. But the social and religious mores of her time dictated that a girl must marry–even against her will–and obey her husband in all matters. When Deborah is forced to marry the violent son of the local judge, she rebels, determined to forge a path of her own.

Captivated by the notion of escaping the arranged marriage and fulfilling her late father’s dream, Deborah embarks upon an epic journey to find a mysterious elixirist, one rumored to be blessed with the ability to turn women into men. It is a journey that proves increasingly perilous–filled with wild beasts, lustful men, unscrupulous priests, and warring tribesmen. Yet Deborah manages to attract unlikely allies, including lepers, slaves, Moabite traders, and even a dead tiger, while she persists in the face of seemingly insurmountable setbacks and continues to pursue her daring quest.
Part historical novel, part adventure story, part visionary fiction, Deborah Rising is a captivating tale about a girl on the cusp of womanhood, whose unrelenting struggle to overcome discrimination, sexism, and paternalism spoke to the lives of girls and women today.

Deborah Rising by Avraham Azrieli is a stunning historical fantasy. One that has an epic journey that no reader could guess. It’s nothing like anything I have read. This novel brings about some historical people and their customs as well as what kind of lives they lived back then. I was constantly intrigued by the story. Each page sent me on another journey. the main journey was one that a father passed down to his youngest. After losing her parents and her older sister, the young girl sets off to fulfill her destiny. However, trouble comes her way each time. The men from her land are worshiping idols and killing innocents due to lies and greed. The lives of women are similar to those of the Indian customs. Many women are controlled by men. A paternal ruling that still survives, today. I was frightened by what the women went through constantly. Even if they followed rules by their society there was always a man or men who abused them. Sadly, many are stuck in this threatening lifestyle. Like Deborah’s older sister. One false accusation and she like many other women were stoned to death over a lie. Women were not permitted to speak on their defense. I almost wished Deborah’s sister retaliated. Imagine letting your own people stone for no reason at all. Why should the innocent be slaughtered so easily? Realistically told and captured the time period perfectly. Avraham Azrieli is indeed a talented new author. His work can be read by teens and adults. The issues presented in this novel were strong yet the material was done in a clean manner. After reading this book, I felt like I traveled back in history. The young woman’s journey was quite fascinating to follow. An adventure that is both intriguing and entertaining. Deborah Rising is a YA religious tale, that I highly recommend to readers worldwide. I believe that the issues shown in this title are ones that need to be read by all.