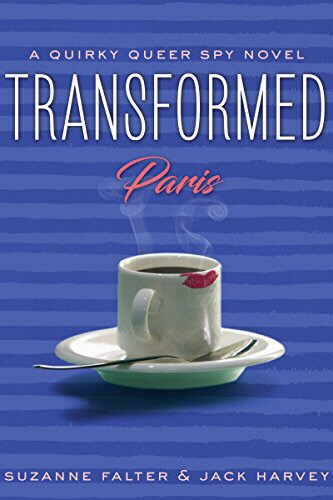 Transman spy Charley MacElroy travels to Paris to help French authorities break up a Neo Nazi plot to scatter dirty bombs throughout the city. His older lover Electra comes along to study French, but she soon discovers Dickie Borque, an sinister British aristocrat with lavender hair, may be behind the plot. Charley, however, is not so sure.

Meanwhile, she and Charley begin having love troubles when he suggests opening up their relationship to suit his pansexual desires. After discovering that he may have been fooling around with his attractive new male assistant, Electra moves out in a huff. Soon Charley is wandering the quays alone, trying to find the dirty bombs while wistfully longing for his love.
Electra enlists the help of Dickie’s feisty eighty-something milliner, Odile, to break up the plot. But then suddenly, Electra disappears. Now, Charley must search frantically for both the bombs and Electra amidst the cafes, conversation, and the gleaming, rainy streets of Paris in winter.
Rating: 5 stars

Transformed Paris by both Suzanne Falter & Jack Harvey is definitely for adults only due the amount of adult content. Those you love erotica’s will definitely enjoy this read more than those who don’t read eroticas. Other than those issues, I have to say that the writers did an excellent job portraying their characters. The scenes of Paris were great. A famous city that readers can almost see, smell, and hear through the words on the pages. There’s plenty of action, travel, and adventure going on here to keep readers interested. Charley MacElroy is a want to be spy. He is like the guy in Pink Panther movie. Just like the actor from that movie this character wants to help the police solve a case. In this case, to prevent the spreading of bombs. This part of the fictional tale can be quite a nightmare to those who lived in New York City with all the bombings going on…this story will keep readers on the edge of their chairs.  I don’t like Charley so much…but the other characters are great. Electra proves to be the genius in this circle of characters. Overall, Transformed Paris has what it takes to be a fascinating adventure. I recommend it to those who love plenty of sex scenes, danger, and a good mystery.