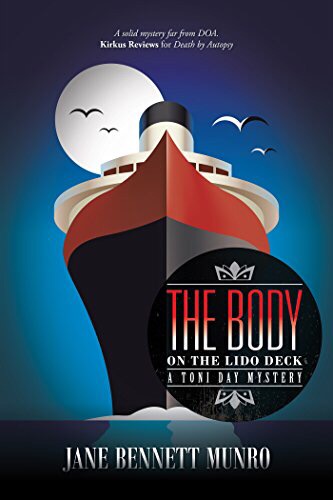 Twin Falls pathologist Toni Day is on a Caribbean cruise with her husband and parents when she is jerked out of a peaceful slumber by a horrific scream. After several unsuccessful attempts to reclaim sleep, Toni heads to the ship’s deck to read. But shortly after the sun rises, everything changes when a mangled body plummets from the roof into the pool next to her.

Rather than flee in horror, Toni teams up with her stepfather, Nigel, and Scotland Yard to investigate the murder, despite resistance from the captain and the Royal Barbados Police. With just three days left in the cruise, Toni and Nigel must work fast, especially when two more bodies are discovered and a crew member is fatally injured. As Toni delves into the histories of crew members, she uncovers mysterious connections that lead back nearly three decades. Finally, with only one night remaining, Toni and Nigel must set a trap in a last ditch attempt to find the killer before one of them becomes the final victim.

The Body on The Lido Deck is a dazzling mystery that lures readers to its depth. For fans of CSI this is definitely up your alley. There’s a lot of dead body language that some might not like but goes with the territory when dealing with dead bodies. The main character, Toni Day, is very blunt. Straight forward kind of person. Her habit it to say or question things…and it may come of as rude. However, in her line of work, she has to be that way. In this particular novel, Toni was traveling on vacation with her husband and parents. As usual she finds a murder case. Except this one almost lands directly into her lap. There are plenty of suspects and as they case builds it’s still hard to guess who done it. I loved the suspense and intrigue created perfectly by this writer. I have never before today, read a book by Jane Bennett Munro. After reading this tale, I have to say that I am super happy I did read it. It will keep readers questing and entertained. So many possibilities and few leads. Evidence goes missing and the main character gets into more dangerous situations as the book unfolds. Overall, I loved it. Highly recommend The Body on The Lido Deck to readers everywhere.