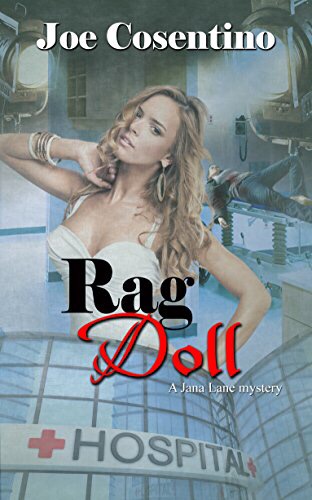 America’s most famous ex-child star Jana Lane is starring in The Detective’s Wife, a murder mystery television show in 1985. Guest starring on the show is Christa Bianca, a rags-to-riches ingénue who has flooded the entertainment press. Life imitates television as cast members are murdered, and once again it’s up to Jana, along with sexy ex-detective Chris Bove, to save the day before the lights fade to black.

Once more, Joe Cosentino has created the perfect masterpiece. This book, the 5th Jana Lane Mystery novel, is superb. Five major issues are discussed and well-written. Issues ranging from gay rights to Christian beliefs to AIDS. The entire plot takes readers deep into the trouble ahead. Murder, mayhem, and romance. Jana Lane is an older actress that is clever, beautiful, and sweet. She is a happy mother of three boys and a wife to a great husband. Her youngest son is featured on the same TV program as Jana. By now, readers know that wherever Jana Lane goes to act, there’s always a murder case to solve. Rag Doll is the best story in this series so far…

I love Joe Cosentino’s writing. He incorporates major themes that readers can easily relate to such as bullying. Humor is found within these pages as well. I loved watching Jana Lane struggle with the new on and off screen attraction towards a co-star. Definitely keeps readers guessing. Plus, the troubles ahead on studio cause wide panic and fear among the group of actors. So many suspects…and so little time to catch a killer. Plus, Jana’s nightmares and a personal issue keep the suspense building. Readers will be excited, intrigued, and fascinated with this new title. Joe Cosentino has out done himself when he wrote Rag Doll. I was amazed how he brought up evmerything, keep readers in the dark, and made it entertaining as always. I loved it. This is a definite must read for readers worldwide. A bit of everything for All to enjoy. Overall, I high.y recommend it and look for the next grand adventure.