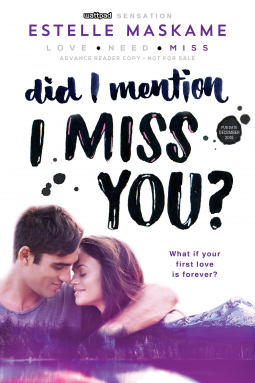 It’s been a year since Eden last spoke to Tyler. After his sudden departure, she left for Chicago for college and found a new boyfriend—someone who (hopefully) won’t run when things get tough, like Tyler did. But as school breaks up for the summer, she heads back to Los Angeles. And she’s not the only one with that idea…

Despite their break-up, Tyler’s determined to rekindle what they once had. He’s restarted his life and he wants her in it. Eden’s not sure where to begin in finally forgiving him. But when a tragedy draws them together, Eden must search her heart and decide if Tyler is worth the risk once and for all.

In Did I Mention I Miss You?, the explosive finale to Wattpad sensation Estelle Maskame’s DIMILY trilogy: three unforgettable summers of secrets, heartbreak, and forbidden romance.

Did I Mention I Miss You? by Estelle Maskame is well-written and a deeply emotional read. I would recommend this book for those 18 and above…due to adult content. I would not want any fourteen-year-old reading this tale. Which, it says it’s suited for…other than that, this was a superb novel. The emotions coming forth from the scenes and the feelings from the characters were realistic. I can see them acting the way they did. Both main characters grew up…and changed into happy individuals. Their lives were so full of angry,  destruction, and troubles that it was nice to see things work out…eventually. There are a lot of major issues mentioned within this one title. Drugs, alcohol, sex…and step-siblings by marriage. I didn’t like the fact that family members could be in a romantic relationship, but they weren’t family by blood. It just felt so weird reading about it. But it was about two teens falling in love and struggling to make things right. I felt sympathy for both of them. Almost felt like the Romeo and Juliet tale in many ways…Estelle Maskame did an excellent job in portraying her characters as real life people. I thought it was great how she took something that happens and shows how it could work out in the end. There were still some issues to work through among the cast of characters but for the most part, I think the ending was perfect. I thought this novel was highly engaging and I recommend to readers.