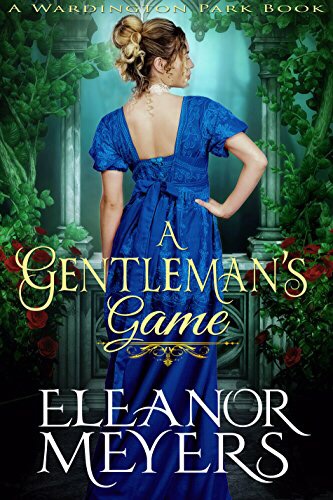 But the rule of attraction have little say in London Society.

Edith learns quickly that as the daughter of one of London’s wealthiest bankers, she has to live by a certain set of rules.

Yes… rules – something she hates but needs to live with.

But most importantly, Edith is only allowed to marry a man with a title.

So, denying her heart, she’s turned her back on herself and looked toward destiny.

… Too bad the man who happens to catch her eye does not play by the rules.

Nelson James is mathematician, wealthy landed gentry, and the inventor of a new creation that is bound to change the course of the world forever.
But… what Nelson doesn’t have is a title.

Still, to have Edith in his arms, he’s willing to give away everything he owns for simply one week in her presence.

And it’s one week that neither will they ever forget.

But at week’s end, will destiny and rules win the day or will Nelson and Edith find a way to gain their happily-ever-after?
Rating: 5-stars

A Gentleman’s Game by Eleanor Meyers is another perfect masterpiece. The tale is addictive from beginning to end. Readers will be swept off their feet. The romance builds with every page. Clean, sweet, and fast-paced. This plot is the best well-crafted story that I have read by Eleanor Meyers. Instantly, I want to know more about her characters. Edith and Nelson pulled at my heart and had me falling deeply in love. Their story is captivating. Rules, society, and where the hearts lead…are three powerful forces that are being carded inside this Victorian romance novel. A Gentleman’s Game brings about the most fascinating personalities and roles. A mathematician and a lady…love comes knocking their world apart leaving them wondering where it will lead them next. However, as the rules have it, neither one can be together. Is having a title over rated or will love fail…? Overall, I highly recommend this talented writer’s book. She never disappoints.