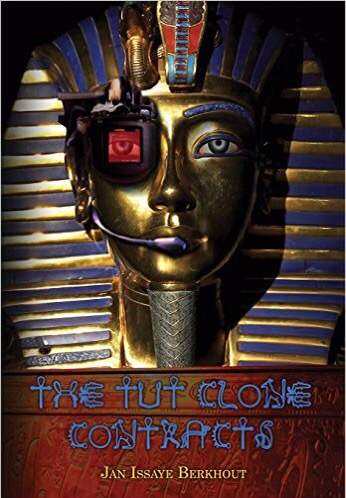 Readers of this Book Will … 1. Enjoy robot combat with live ammunition at the 2033 Munich Oktoberfest as Edison Richards, a ten-year-old Tut clone, competes against the leading war-robot operators of Europe. 2. Participate in an attack on a drug lord’s mining camp in Guatemala as Kachil Coban, a Tut clone undergraduate at the University of Chicago, rescues a young Mayan cousin from sexual slavery. 3. Hide under a sink in the Oriental Institute as two of the Tuts’ girlfriends raid the place one night, looking for evidence of the clones’ origins. 4. Join a truck convoy crossing Cairo under fire as the Tut clan, now united, takes over their ancestral homeland, founds the 34th Dynasty, and revives a dysfunctional Egyptian state. 5. Listen in at the Tuts’ first press conferences as they meet the challenges of ruling Egypt after a lost war, an Islamic insurrection, and economic chaos. 6. Join the funeral procession of John Jazz Tut, assassinated by a terrorist, as he becomes the first royal interred in the Great Pyramid of Giza in 5,000 years. Hear Gordon Geertsma, now Tutankhaten II, deliver a funeral oration and restore Egypt to its place as a leading center of civilization in the year 2046, newly renumbered Anno Aegypti 6046.

The Tut Clone Contracts by Jan Issaye Berkhout is one marvelous journey. Jan Issaye Berkhout takes readers into an unforgettable adventure of a lifetime. Intrigue, action, travel. Egypt is a fascinating place where so much can happen. This story has everything readers could dream of plus, more. It’s fast-paced and thrilling. There’s robotics, slavery, dysfunctional state of Egypt and others. Wars, danger, political as well as economic conflicts are brought into the tale. Creating a rich fantasy filled with nothing but exploration as the plot unfolds.

This novel, caught my interest from the title alone. Anything with Egypt catches my attention. In fiction, there was a ton of room to make a story. The writer, Jan Issaye Berkhout went beyond any writer. I was excited, caught in suspense, and loving every moment. Every page had visual and entertaining scenes. The characters were well developed. Some parts of the novel, were educational. I found myself completely engaged inside of The Tut Clone Contracts. Whether one is into technology, sci-fi, or adventure…this is the perfect read as it has it all. Overall, I recommend it the book to readers worldwide.