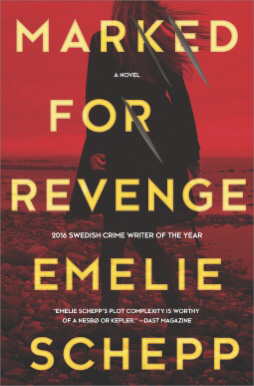 When a Thai girl overdoses smuggling drugs, the trail points to Danillo, the one criminal MMA-trained public prosecutor Jana Berzelius most wants to destroy. Eager to erase any evidence of her sordid childhood, Berzelius must secretly hunt down this deadly nemesis with whom she shares a horrific past.

Meanwhile, the police are zeroing in on the elusive head of the long-entrenched Swedish narcotics trade, who goes by the name The Old Man. No one has ever encountered this diabolical mastermind in person; he is like a shadow, but a shadow who commands extreme respect. Who is this overarching drug lord? Berzelius craves to know his identity, even as she clandestinely tracks Danillo, who has threatened to out her for who she really is. She knows she must kill him first, before he can reveal her secrets. If she fails, she will lose everything.

As she prepares for the fight of her life, Berzelius discovers an even more explosive and insidious betrayal—one that entangles her inextricably in the whole sordid network of crime.

The second in a trilogy of fast-paced, high-stakes thrillers by the international bestselling author Emelie Schepp, Marked for Revenge involves the international drug trade and child trafficking and features the brilliant, enigmatic prosecutor Jana Berzelius, whose own dark past has, until recently, been hidden even from herself.

Marked for Revenge by Emelie Schepp is the second installment to one of the best and darkest thrillers ever. Immediately, I was drawn into the web of darkness. One that definitely surrounds the main character, Jana Berzelius. A prosecutor who goes to danger’s most i inviting places to get what she needs. Answers. Things like secrets, betrayals, and suspense have their way of always making it into Emelie Schepp’s novels. I felt compelled to know more. Even if that meant following, Jana Berzelius, to her death.

The characterization is amazing. I got more of an insider’s scoop with this book. More information on the main character’s life, is unveiled. Emelie Schepp has created another compelling read. She makes organized crime like child trafficking into one of the most horrendous nightmares yet. While, I wish these crimes were not being committed at all, the reality and fear of what happens is perfectly caught within this novel. The plot is fast-paced, complex, and bone chilling. Captivating, frightening, and engaging…Marked for Revenge is definitely a recommended read for all.