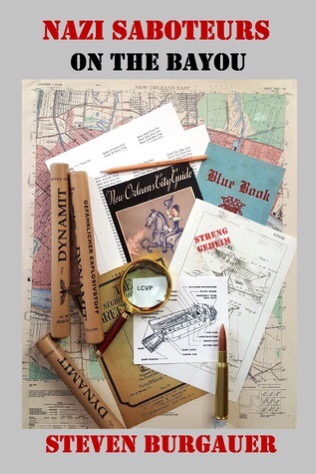 Nazi Saboteurs on the Bayou intertwines historic persons, actual events and distant locales of World War II with a fast-moving fictional Nazi plot to disrupt the manufacture of Higgins boats, the remarkable landing craft that won the war for the Allies. Spanning the globe from amphibious landings at Guadalcanal, to the Navajo code talker school, to the exotic environs of New Orleans, to the secret world of Bletchley Park, this tautly written thriller, covering two weeks during the summer of 1942, combines a fully imagined cast of characters with the historically important figures of Andrew Higgins, members of American and British Intelligence, Navajo code talker Chester Nez, Commander Ian Fleming of MI6, along with a Polish intelligence officer, and “Silver Dollar Sam” Carolla, crime boss of New Orleans.

An old German is found dead in a New Orleans whorehouse. Sewn into the lining of the dead man’s vest is a notebook filled with hand-drawn maps and notes about the comings and goings at military installations. German conspirators fret that their local contact (the dead German) is overdue. Mafia crime boss Nico Carolla, is soon drawn into the disposition of the corpse.

We move to the Pacific and meet the grandson of the dead German, PFC Brock, a U.S. Marine being trained for the landings at Guadalcanal. Then we meet Andrew Jackson Higgins at the helm of the single most important landing craft ever built, the Higgins Boat, the steel-ramped landing craft that brought American troops to Pacific islands and to Normandy. In his colorful manner, Higgins is instructing a class of Coast Guard newbies on how to properly drive and operate his nearly indestructible boat. Higgins faces shortages of materials, manpower, and factory space. The Mafia boss controls much of the labor supply. Accommodations must be made to placate the mob family, who also have Old World connections in critical to the upcoming North African landings.

The Waffen-SS officers charged with sabotaging the Higgins Boat plant arrive, only to learn of the loss of the intelligence gathered by the dead German. Now enter the code breakers at Bletchley Park who intercept the commando team’s messages, including one female mathematician through whose eyes we see inside Bletchley Park.

America is almost entirely dependent on Britain’s MI6 for intelligence gathering. We meet Martina Amerada, a Cuban woman with a high-level banking responsibility, including ties to British intelligence, and who is Nico Carolla’s mistress. Martina moves money for the crime family and provides diplomatic cover between the Palermo branch of the family and the planners of Operation Torch. We are also introduced to the Navajo code-talker program essential to securing Marine Corps messages in the Pacific theater.

Bletchley Park is busy trying to crack the code imbedded in the Himmler messages, We move back to the Pacific where grandson Brock is involved in the bloody landings ahead of Guadalcanal. Brock is wounded and nearly dies as the remaining commando attempts to demolish the largest Higgins Boat manufacturing facility in New Orleans. With the help of British intelligence, Nico Carolla prevents the plant from being destroyed and thus becomes the hero of the story.

Operation Torch gets underway and the Higgins boats prove their indispensability to the war effort. PFC Brock recovers from his wounds, and Martina takes possession of all intelligence related to the German commandos so the threat never becomes public knowledge.

Nazi Saboteurs on the Bayou by Steven Burgauer is every history buff’s dream book. The scenes immediately come live. Bursting with death, loss, and action. A fast-paced thriller that sends readers back to WWII time era. Germans are striking again…and it’s only a matter of time if they succeed or fail their task.

The realistic telling of what really goes on in a war time zone was believable. The characters each add a piece to the enchanting tale. It will take time, before the dead German’s team realizes that something is wrong. Secrets, dead bodies, codes and a mystery that is addictive.

Steven Burgauer is a talented writer. His writing is superb. Having read another of his works, I find his storytelling engaging. It’s like reliving the past. A past that contains consequences for every move made or not made. Like a domino effect. The mafia are tied into this story. I found it entertaining. A large scale operation hanging loosely by a thread…and characters racing to save it…Nazi Saboteurs on the Bayou is a historical fiction novel, many don’t want to miss. All the historical details and action going on…amazed me.  Diplomacy, violence, and enemies on attack…readers will find themselves lost within every page. Just like I did. Overall, I highly recommend this read to all.