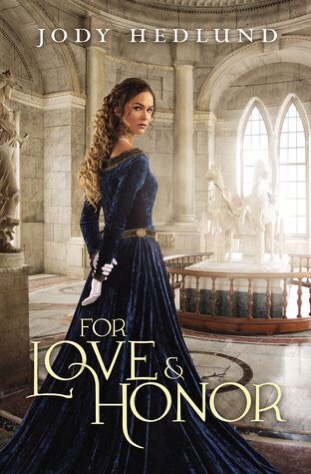 Lady Sabine is harboring a skin blemish, one, that if revealed, could cause her to be branded as a witch, put her life in danger, and damage her chances of making a good marriage. After all, what nobleman would want to marry a woman so flawed?
Sir Bennet is returning home to protect his family from an imminent attack by neighboring lords who seek repayment of debts. Without fortune or means to pay those debts, Sir Bennet realizes his only option is to make a marriage match with a wealthy noblewoman. As a man of honor, he loathes the idea of courting a woman for her money, but with time running out for his family’s safety, what other choice does he have?
As Lady Sabine and Sir Bennet are thrust together under dangerous circumstances, will they both be able to learn to trust each other enough to share their deepest secrets? Or will those secrets ultimately lead to their demise?

For Love & Honor by Jody Hedlund is like a fairy tale. Inside, readers will find a rich noblewoman with a secret. A secret that could keep her from marrying and one that might lead her to a disastrous life. Then, there’s a knight. He needs protection for his family. By marrying, Lady Sabine, he can do just that. It’s amazing what these two charcaters would do for love and honor. Thus, this title fits in well. I felt an instant connection to both Lady Sabine and Sir Bennet. Both are at war with their struggles. I found it unique. Especially, Lady Sabine’s issue. Not too many heroines have her issue to worry about…I loved how Jody Hedlund created an original plot that still had that fairy tale feeling. The ending was perfect. Sweet, engaging, and romantic.

For Love & Honor offered more than just an engaging rich romance. It also brought readers like myself suspense, danger, and quests to fill. An emotional journey that could turn for the worst at any moment. I wasn’t sure what to expect for the outcome. I was deeply fascinated from beginning to end. Jody Hedlund has a knack for creating a fictional world where I completely lost myself. The world in which Lady Sabine and Sir Bennet live within was promising. Overall, I would highly recommend this historical romance to all.